The Growth of Bible Skepticism in America 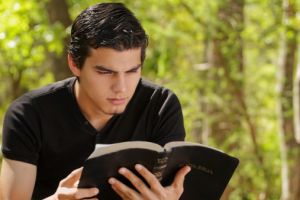 "For the Bible tells me so". Most Christians in America probably remember singing these very words as children in Sunday school. It is a simple proclamation that if the "Good Book" says so, you can be sure it is true. But this strong faith in Biblical truth is not unshakeable. The United States is well known as being disproportionately religious when compared to other developed nations, but a new generation of young people is questioning the inerrancy of their parents' cherished holy book.

The new findings come from a survey conducted by Barna Research for the American Bible Society. The result of interviews with over 2,000 adults in January and February, they suggest that more and more Americans are beginning to view the Bible as the teachings of men rather than the word of God. The highest increase in people who felt this way was among millennials people between the ages of 18 and 29. The survey found that Bible-believers and Bible-skeptics now constitute the same percentage of the American population, at 19 percent. The number of skeptics represents an increase of 10 percent from 2011.

It is a troubling prospect for those who believe the Bible is the word of God, and not just a collection of human teachings and stories. American Bible Society president Roy Peterson has expressed a firm commitment to preserving the Bible's status as divinely inspired, saying, "we just can't hand them a Bible and expect them to find the answers. We have to get out the word to give God's word a chance. It's urgent". He has also said his organization is "adjusting" its "outreach" to lure in a new generation of Bible believers.

But will such efforts prove effective in mitigating the increasingly suspicious opinions young people are expressing about Biblical doctrine? It is now common to find social media outlets parodying or criticizing Bible-based belief, from accusations that the book endorses slavery (Ephesians 6:5) and the murder of groups that include children (1 Samuel 15:3), pregnant women (Numbers 31:15-18), homosexuals (Leviticus 20:13), and non-virgin brides (Deuteronomy 22:20-21). It is perhaps no wonder young people should question whether such teachings could originate from an omnibenevolent deity.

Even the United States, an "evangelical outpost" in an increasingly secular world, is following in the footsteps of its European and Canadian peers, with a new crop of young people questioning the alleged divine authorship of the Bible. As a Universal Life Church minister, perhaps you come from an evangelical background. What are your thoughts on this new Biblical skepticism? Should the Bible be treated as the divine word of God, or the teachings of men?