So You Think You Can Preach? 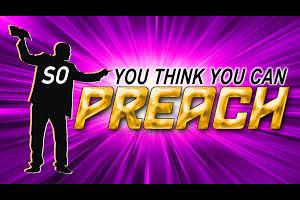 The idea, at its core, is an admirably democratic one. Television audiences around the country can view and vote for the individual that they think is most worthy of whatever title or prize is being doled out by the show. The genre is not without its critics, though, with many (perhaps rightly so) pointing to obtrusive meddling at the hands of producers and the fact that these types of shows tend to attract the wrong sorts of people as some of the reasons why Americans should tune out.

Despite these calls, the shows are more popular than ever today, with new flavors popping up each season. One new variation, So You Think You Can Preach? has, in particular, been generating quite a great deal of buzz in the religious community. Is a reality television show really the most effective way to select a new minister for a congregation?

The Rise of the Televangelist

The connection actually isn't all that far-fetched. Certainly, preaching has always involved a bit of showmanship - Jesus may not have been able to draw the kinds of crowds he did to his sermons if he hadn't been wandering the countryside raising the dead and turning water into wine. The Puritanical ministers of early America were famously fiery in their rhetoric, and were able to mobilize entire villages against a person/group of people with just a few twists of their tongue. The advent of the "megachurch" has only continued this tradition, incorporating (and often televising) ministers preaching to crowds of hundreds interspersed with impressively produced musical numbers and other spectacles.

"Televangelists" like Joel Osteen, utilizing their superhuman charisma, are able to reach thousands of people. Their sermons are zapped around the world, and they deliver their services in churches that look a lot more like the Staples Center than the small parish where your grandparents were married. The reality television will certainly self-select charismatic individuals more suited to this megachurch environment, and it is most than likely that a highly charismatic individual will end up winning the competition... but is charisma really the most important factor in selecting a preacher?

The Danger of Charisma

As history has taught us, charisma can be both a powerful tool for good and a deadly weapon. While Mohandas Gandhi and Dr. Martin Luther King Jr. utilized their charismatic prowess to mobilize multitudes to peaceably campaign for justice in the world, Adolf Hitler used the same personal magnetism to mobilize a nation to rise in war against the rest of the world.

Clearly, we would be wise to be wary of charisma in all situations, and should make an effort to ensure that we are as pleased by the content of the message being delivered as we are with the passion with which it is being delivered.

Keeping that in mind, it does beg the question... the medium of television isn't exactly lauded for being one in which thoughtful, long-form messages can be effectively delivered. It is rather more hospitable to short-bursts of pithy, rapid-fire communication. While speedy content isn't necessarily evil content, it is certainly hard to imagine that an individual's ability to analyze some of the larger spiritual questions that we face as a society in-between commercial breaks for steam mops and auto insurance.

So You Think You Can Preach?

Without having seen the show, it is perhaps unfair for us to assume that it is an inherently inappropriate way to select a minister. Certainly, we can imagine less appropriate methods of selection...

It raises a number of challenges that we face at the Universal Life Church every day - how can we build an effective faith community and foster helpful, philosophical discussion on a medium (internet) that isn't always the most hospitable for those kinds of interaction? As our lives become increasingly intertwined with our technology, it is crucial that our religion move with us into the 21st century.

So You Think You Can Preach has not, as far as we are aware, been picked up by any networks. Its creator has indicated that they are still in the process of filming their pilot, and that the first round of auditions will be held in Detroit on October 3.

If any of you are interested in auditioning, you must be between the ages of 16 and 35 and submit an application video. The show's target audience is apparently Christians, so it is likely that you won't have much success unless preaching specifically to that denomination. Reportedly, the producers have already received 1000 applications.

The winner will receive $25,000, a new car, and the chance to "open" at at least two yet-to-be-named megachurches.

What do you think? Will you be tuning in?