President Trump spoke at the National Prayer Breakfast this morning, an annual gathering of religious leaders held in Washington D.C. He told the crowd that his administration will "totally destroy" the Johnson Amendment an IRS rule which says that non-profit organizations (including churches) must refrain from endorsing specific candidates running for office, or risk losing their tax-exempt status.

While many people see the amendment as an important safeguard for the separation of church and state, religious groups insist it unfairly restricts their freedom of speech. Trump continued his speech, saying he wanted to "allow our representatives of faith to speak freely and without fear of retribution." He explained that "freedom of religion is a sacred right, but it is under serious threat."

History of the Rule

The Johnson Amendment is named after former president Lyndon B. Johnson, who proposed the rule change back in 1954. The policy was widely supported, and passed with little resistance from lawmakers on either side of the aisle.

Although the rule applies to all non-profit organizations, churches tend to be the most affected. Pastors have to be careful when talking about politics on the pulpit. Any message to vote for or against a particular political candidate can be considered grounds for removal of tax-free status. That said, over the years a number of clergy members have protested the rule by delivering overtly political sermons. The IRS will often threaten to act on the infractions, but rarely delivers any real punishment.

The incoming administration was expected to be friendly to religious groups, but the announcement still came as a surprise. Many people are worried that if the rule change goes through, politics and religion will become further intertwined.

President Trump hinted at this new reality when he said that the Johnson Amendment violates the American "right to worship according to our own beliefs." But are religious beliefs synonymous with political beliefs? One can envision Sunday services during a future election season turning into quasi-campaign rallies for specific candidates.

After promising to repeal the rule in a speech last June, Trump said "I think maybe that will be my greatest contribution to Christianity."

While free speech is often cited as the crux of this issue, another aspect involves political donations. If the rule changes, churches would be free to give money directly to politicians. Since any contributions from parishioners would be tax-free, churches could become large fundraising groups for political candidates essentially transforming them into religious Super PACs.

How Do Churches Feel? 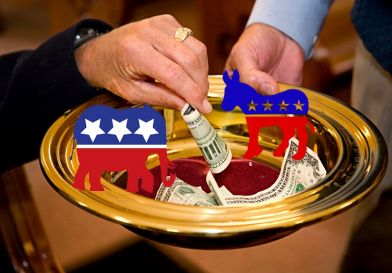 In 2015, a Christian polling firm called Lifeway found that 79 percent of Americans believed clergy should not endorse candidates while at the pulpit. Even among evangelicals, support for was quite low; only 1 in 4 thought it was a good idea. However, certain outspoken evangelical pastors, such as Jerry Falwell Jr., have expressed strong support.

Although some religious groups are in favor of repealing the Johnson Amendment, others think it sets a bad precedent. After Trump's speech this morning, the Baptist Joint Committee for Religious Liberty released a statement insisting that the rule exists for good reason:

"Politicizing churches does them no favors. The promised repeal is an attack on the integrity of both our charitable organizations and campaign finance system. Inviting churches to intervene in campaigns with tax-deductible offerings would fundamentally change our houses of worship. It would usher our partisan divisions into the pews and harm the church's ability to provide refuge," the organization said.

The issue is clearly complicated. On the one hand, church leaders want to able to touch on politics in their sermons and even endorse specific candidates if the situation calls for it. On the other hand, opponents argue that repealing the Johnson Amendment will have unintended consequences. What do you think about the president's plan? Should churches be permitted to get involved in politics?