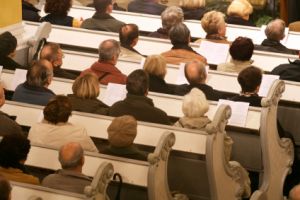 There is bound to be some case or another at any given time that challenges the constitutional rights of the individual if not, it is only a matter of time until the next case pops up. (Democracy is an ongoing experiment, it seems.) So what happens when a child molester who is on probation wishes to attend church? According to the supreme court of the U.S. state of New Hampshire, barring such an individual from attending church for the foreseeable future does not infringe on his or her constitutional rights and freedoms.

The New Hampshire state Supreme Court recently confirmed the ruling of a lower court which bars convicted sex offender Jonathan Perfetto, of Manchester, N.H., from attending a Jehovah's Witnesses kingdom hall until his probationary period has ended. Perfetto has a long history of committing sexual assault against both children and adults. He served time in prison when he was 17 for molesting a younger male relative and again as an adult for assaulting several women. In addition, he was convicted in 2002 for possession of child pornography. The decision came despite Perfetto's insistence that he would be accompanied to church under the supervision of a chaperone.

Explaining how the decision would not interfere with the free exercise of religion, the court argued that Perfetto would be able to practice his religion in other ways, without attending church. However, an exact outline of the method whereby Perfetto would be allowed to continue practicing his religion was not readily apparent, and it remains unclear whether church attendance is necessary in order to be a practicing Jehovah's Witness.

Whether or not Perfetto can really practice his religion without attending church is a crucial question. Taking the court's argument to its logical conclusion, if church attendance is unnecessary to practice one's religion, there is never a time when the court is out of place to bar an individual from attending church; church attendance is no longer a right pertinent to the free exercise of religion. But a congregation and a place of worship are fairly basic components of religious observance even the IRS itself, with its Fourteen Points, stipulates such a requirement in determining the legal status of churches for tax purposes. (Interfaith online churches such as ULC Monastery recommend using these as a guide for tax purposes.) Three of these criteria are as follows:

Others refer to a system set up for educating and training clergy members. If these are the official criteria for legal church status according to the government of the United States, it seems as if the government might be contradicting itself by playing down church attendance as an integral part of religious observance.

Of course, the argument could be made that when two rights butt heads, as in the case described above, it is more important to protect potential sex abuse victims than to give their victimizers permission to attend church.

Share your thoughts with us. Should Perfetto be allowed to attend church as a form of religious freedom, even though he is a convicted sex offender?