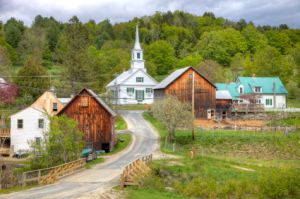 Recently on the Universal Life Church Monastery blog we discussed some stories dealing with the conflict between religious freedom and zoning laws. In one case, ULC minister Robert Seals faced off with neighbors who complained about the noise created by music and dancing at a pagan temple on his property; in another case, neighbors confronted a local church over their right to hold picnics in a city park to feed the homeless, whom they claimed vandalized surrounding property. Now a Roman Catholic couple in Vermont have earned the disapproval of locals over the display of a giant cross in a rural part of the state. The important question, though, is whether or not such a display interferes with the rights of others.

The cross in question was put on display by Joan and Richard Downing, a couple in their late seventies, as a later addition to the chapel they opened for their many foster children. At twenty-five feet high, the Cross of Love of Dozule is named for a small French town where some followers of the Roman Catholic faith Rome believe Jesus appeared and gave instructions about the cross. The Downings argue that their chapel is open to the public and should be treated the same way as a church with a cross on its steeple; however, for neighbors like David Gascon and Barbara Irwin, the religious expression meant by the cross oversteps its bounds and impinges on the rights of others. For them, the cross, which is lit electrically, is far too bright and should be treated like the neon sign of a business. "It's very large, and when they first put it up it was extremely bright, as bright as three full moons," said Gascon. "It's hard for me to see it as a necessary practice of religion. To me, it seems they're just being showy."

So where in this case is the boundary between freedom of religious expression on one hand, and freedom from er light pollution on the other? The argument of Gascon and Irwin that the large cross ruins the ambience of the rural neighborhood does at first glance seem weak. Churches topped with steeples adorned by crosses dot the New England landscape everywhere one looks, so the Downing cross might be seen as just another addition to the characteristically Christian church architecture of the region. The only difference is that the cross itself is twenty-five feet high, and brightly lit. But the Downings have already fallen in line with the local land-use commission's zoning regulations for churches and other places of worship: "Gascon and others complained to town zoning officials, who limited the structure's nighttime illumination to several weeks around Christmas", reports Dave Gram of The Oklahoman.

The key point is that the Downings should not be allowed to invoke religious freedom in order to interfere with other freedoms. If there are guidelines for practicing free speech (e.g. designated free speech zones which allow protestors to demonstrate while also allowing motorcades through), and if the free exercise of religion is equal in value to freedom of speech and assembly, it follows that the former is governed by the same conditions as the latter. Ultimately, then, what we are talking about is a compromise between freedoms. But so far the Downings have achieved exactly this with their neighbors. That leaves one theory left the cross is just tacky, and it offends the scruples of local antique dealers.

But, as much as we might not like to admit it, tackiness is beside the point when constitutional rights are at stake. Yes, kitschy Catholic décor can be an eyesore, but does it really interfere with anybody's day-to-day activities? And does it really fall out of character with the natural beauty of the landscape, which is already dotted with cross-adorned steeples? And what about Christmas lights? The Downings have already promised to restrict illumination of their cherished symbol of the Christian religion to Christmastime, when festive lights become the foremost attraction in such communities anyway. So it might be jumping the gun just a little bit to say that this scarcely imposing structure is distracting drivers, keeping people awake at night, or striking atheists dead on the street with lightning bolts. Tacky? Perhaps. A reverse violation of constitutional rights? Probably not.

We would like to know what our priests and ministers ordained online think about this issue. Should the Downings be allowed to keep their cross in place as long as they restrict its illumination to the Christmas season, and to a reasonable duration of the evening? Let us know what you think.