Do We Have Religious Freedom?

January 16th is Religious Freedom Day, the birthday of religious freedom in the United States. On this day in 1786, Thomas Jefferson's Virginia Statute for Religious Freedom was officially adopted. This statute later became the basis for the Establishment Clause in the Constitution, giving citizens of the United States right to practice any religion of their choosing. Religious freedom during this period of history often conjures up images of Protestants fleeing the iron fist of the Church of England. However, Jefferson held an expansive view of religion. He believed that all citizens should be able to practice their faith freely, be they Protestants, Quakers, Catholics, Jews, or any other denomination.

The First Amendment reads as follows:

"Congress shall make no law respecting an establishment of religion, or prohibiting the free exercise thereof; or abridging the freedom of speech, or of the press; or the right of the people peaceably to assemble, and to petition the government for a redress of grievances."

Jefferson was so proud of his contribution to religious freedom that he specifically requested it be included in the inscription on his gravestone upon his death.

Despite a longstanding constitutional right to religious freedom, certain religious groups in the United States continue to feel persecuted because of their faith particularly those who display visible symbols of it. Advocates for better protections argue that if a Muslim woman doesn't feel safe wearing a hijab in public, or a Sikh man cannot don a turban without fear of being attacked, it is evidence that America is failing to live up to Jefferson's ideal. 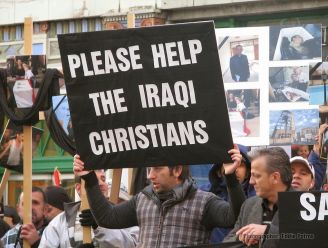 Earlier this month, the Center for Studies of New Religions released a report on the most persecuted religions around the world. Although here in the U.S. Jews and Muslims are at the highest risk, the same is not true elsewhere. Internationally, Christians are actually the most persecuted. In fact, the report determined that 90,000 Christians died in 2016 for their beliefs. Islamic extremists were responsible for about one-third of these deaths. The rest occurred in countries such as North Korea, Somalia and China.

The Pew Research Center found that over 75 percent of the world's population lives in areas with strong religious restrictions. In all, it is estimated that over 600 million Christians are currently being prevented from practicing their faith. The U.S. Department of State lists 60 countries in which Christians face persecution, either from the government or groups within the country.

Clearly, compared to other places around the world, the laws protecting religious freedom in the United States are relatively robust. However, the issues of religious persecution and discrimination are not absent in modern American life. Because of the vast diversity of belief systems that exist in this country, addressing such issues presents unique challenges. As we continue to work towards a better future, we are reminded of a quote from His Holiness the Dalai Lama:

"A society which has many religions should also have many prophets and sources of refuge. In such a society, it is very important to have harmony and respect amongst the different religions and their practitioners. We must distinguish between belief and respect. Belief refers to total faith, which you must have in your own religion. At the same time, you should have respect for all other religions."

Have you ever experienced discrimination or persecution because of your religion? What can be done to promote understanding and unity?