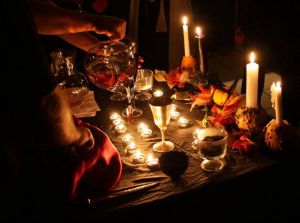 -day phenomenon of Halloween is famous for trick-or-treating, haunted houses, and monsters, but its origins lie in one of the most important dates of the Celtic year Samhain. While children run amok in half-scary costumes hoarding sugary offerings from neighbors, many pagans are preparing sumptuous feasts for the spirits of dead ancestors. Indeed many pagan Universal Life Church ministers preserve this connection and kept this legacy alive.

Halloween's evolution is a tale of Christianization. In the seventh century the Church co-opted the pagan Roman day of the dead, Lemuria, which occurred in mid-May, and re-christened it All Saints' Day. A couple of centuries later, the Church realized the Irish and Scottish were still celebrating Samhain on 1 November. To ensure Samhain festivities also fell in line with Christian theology, the Church moved All Saints' Day forward six months to 1 November, and thus the night before became All Hallow's Eve, or Halloween.

Samhain is a crucial turning point for pagans of the Gaelic tradition. In the Celtic "Wheel of the Year", which only recognizes summer and winter, it marks the beginning of winter as well as the New Year. For ancient pagans it was a time to bring in and bless livestock, celebrate the end of the harvest, and prepare for colder, leaner days ahead; for modern-day Wiccans it also represents the last of three annual harvests, as well as the most important of the four greater sabbats. For everyone, it is a time to commemorate the souls of the dead.

Honoring the Spirits of the Dead

Recognizing the souls of the dead remains the central theme of Samhain as well as its modern incarnation in Halloween. By tradition it is a liminal time, when the veil between the mortal and spirit worlds becomes thinner, allowing spirits and fairies to roam among humans. In former days celebrants propitiated these spirits by offering them food and dressed in costumes either to mimic or hide from them. This tradition survives in modern Halloween costumes, while customs like apple-bobbing stem from divination rites.

Halloween remains a time to suspend belief in one's everyday identity and explore the strange realm where the mundane meets the otherworldly. It becomes an even more rich and layered holiday, however, when we recognize its roots in earth-centered religion.