Responding to the Death of Fred Phelps 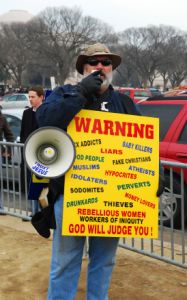 "God Hates Fags". The phrase has become synonymous with bigotry in the United States, particularly the fundamentalist Christian cult known as the Westboro Baptist Church. A new chapter in the church's history began on the 19th of March with the passing of its 84-year-old founder, Fred Phelps. News of Phelp's death incited joyful cheers in some circles, and reserved magnanimity in others. But as Universal Life Church ministers, what should be our response, given how deeply antithetical the man's views were to ULC values?

Westboro's vitriol is world-famous. Founded by Phelps in 1955, the Topeka-based church of about 100 members mostly relatives of Phelps pursued a new course around 1990 with its now-infamous anti-gay rhetoric and picketing of funerals even those of innocent murder victims. Members soon took their protests to military funerals, sending the message that God killed soldiers to show his disapproval of America's growing tolerance of homosexuality. Ironically, Phelps was excommunicated from his own church in August of 2013 after calling for kinder treatment of church members.

Also ironic was the way the church's distasteful approach backfired. It was actually "a wonderful recruiting tool for a pro-equality, pro-social acceptance movement", said Sue Hyde of the National Gay and Lesbian Task Force, because it forced the public to confront the ugliness of extreme homophobia. In a recent episode of her show, Rachel Maddow noted the same unexpected effect on the LGBT movement, describing Phelps as "someone who, despite himself, actually did bring out the best in people, who provided a singular, cacophonous vision of cruelty that ended up being a very, very clarifying thing".

Phelps's passing, and the similarly vitriolic exultation expressed by his enemies, was not lost on Star Trek star, activist, and social media icon George Takei. "Today, Mr. Phelps may have learned that God, in fact, hates no one", said Takei in a Facebook post. "Vicious and hate-filled as he was, may his soul find the kind of peace through death that was so plainly elusive during his life", he said, challenging the temptation to relish with sadistic delight in the man's passing.

Takei didn't back down from his magnanimous stance. In another post, he asserted, "I take no solace or joy in this man's passing. We will not dance upon grave, nor stand vigil at his funeral holding 'God Hates Freds' signs, tempting as it may be", pointing out that "He was a tormented soul who tormented so many. Hate never wins out in the end. It instead goes always to its lonely, dusty end".

Most Universal Life Church ministers find Westboro's hate-filled messages repugnant, and rightly so. But there are two questions to ask ourselves. Is there a silver lining in the way they have pushed people? And is it right to exult in the death of a deeply troubled enemy?