Jimmy Carter on Religion and Sexism 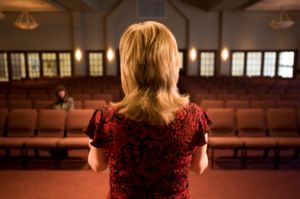 How has religion contributed to the oppression of women and girls? Former U.S. president Jimmy Carter explores this question in a recent interview at The Huffington Post Web site, concluding that religious fundamentalism has misused religious texts to undermine gender equality. Carter describes an ongoing problem which affects most of the world's people at the deepest levels, arguing that religion need not be a tool for oppression, but a champion of liberty and equality.

Breaking the Spell of Misogyny

Carter made his comments after the recent announcement of his new book, entitled A Call to Action: Women, Religion, Violence, and Power. During his interview, he argues that sexism is incompatible with the teachings of Christianity. "There's no evidence at all that Jesus Christ did anything except to exalt women", he said, and "never has a single word or action been alleged to him that would deprive women of their equal or superior rights". The former president recently warned that the oppression of women and girls remains the greatest human rights violation in the world, and religion has played an instrumental role in its continuation.

Still, the pattern of female subjugation in organized religion remains deeply entrenched. It was chiefly for this reason that Carter and his wife left the Southern Baptist Church in 2000 for a new church, where his wife, Rosalynn, is a deacon and the minister is a woman. He points out that denying women equal authority in the church sends the dangerous message to abusive husbands and employers that "if women are not equal in the eyes of God, why should [her husband] treat her with great respect, or why should [her employer] pay her an equal salary to a man?" He notes that "[w]hen religion does that, you can see how it permeates throughout the secular community".

A Matter of Biblical Interpretation?

Carter maintains that misogynistic attitudes in organized religion are founded on misinterpretations of scripture. "The great religions have a mixed message in the multiple verses that exist" in books like the Quran and Bible, he says, while "some of Paul's verses, written to individual little tiny churches, can be interpreted one way or the other". He notes, however, that women make up almost half of the early church leaders listed by Paul in Acts 16, and it was only after the 3rd century that male leaders started interpreting verses concerning women through a patriarchal lens.

Perhaps the most important point Carter makes is that God is gender-blind. In Galatians 3:28, he reminds us, Paul himself writes, "[t]here is neither Jew nor Greek, there is neither bond nor free, there is neither male nor female: for ye are all one in Christ Jesus". Christian and non-Christian alike, Universal Life Church ministers also recognize that, whether male, female, or otherwise, "we are all children of the same universe".