Religion and the Brain 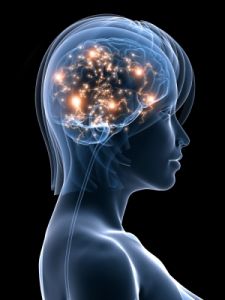 It may come as somewhat of a surprise but researchers at the University of Toronto Scarborough and York University are attempting to explain the physical relationship between one's religion and its correlation with brain activity. The research, under the direction of Michael Inzlicht, Ian McGregor, Jacob B. Hirsh and Kyle Nash will hopefully allow us to better understand the relationship between people and their environment. Thus far, two separate studies have been conducted. Both show a positive correlation between one's faith (or lack of faith) and the activity in the anterior cingulate cortex. The ACC, as it is commonly referred to, is involved in the brain's experience of anxiousness and self-regulation. Studies conducted with the consideration of an individual's personality and cognitive abilities, show that one's faith and religious convictions provide a blueprint for how we understand, act and respond to our own environment. As a result, they have found that religious people tend to be less anxious and have lower activity in the ACC region of their brains compared with non-religious people.

"Inzlicht says it would be interesting to test people as their religious devotion strengthens or weakens over time to see if ACC activation changes accordingly. This could help confirm the correct explanation for the lower ACC activity." -NSSources: