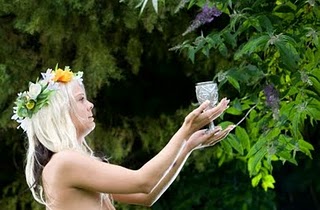 News stories on religious attitudes have been cropping up a lot in the media lately; among those that the Universal Life Church Monastery blog has covered are the imprisonment of an atheist for his beliefs, as well as the relationship between religion and politics and whether the former should inform the latter. Despite the clear guarantee of religious freedom which undergirds the United States government, minority faith groups constantly fall under scrutiny in the United States, with its well-organized evangelical, Protestant Christian ethos.

In fact, plain old bigotry seems to be at the root of the backlash against religious pluralism. In Louisiana, the Livingston Parish Sherriff's Office is keeping its eye on a pagan festival scheduled to take place at a local campground called Gryphon's Nest. Perry Rushing, chief of operations for the Sherriff's Office, shows the begrudging attitude of some law enforcement officials over a theology considered deviant, heretical, or blasphemous: "Obviously, we don't like this type of activity", Bob Anderson of Advocate Florida Parishes Bureau reports him as saying, "but if they are following all of the laws to the letter of the law, then we can't do anything about it". In essence, what Rushing is implying is that the law serves as an obstacle to suppressing such activities, and that if he had his way, he would stamp them out. Even though the proposed activities appear to be lawful, Anderson reports him as saying, "[w]e vehemently oppose this type of activity in Livingston Parish". But if the activities are lawful, why would the Sherriff's Office bother opposing them, except out of personal scruples? It should not, since its only concern is enforcing the law; such contrariety therefore seems inappropriate coming from an on-duty law enforcement official. What seems to be happening is that Rushing is using his office to speak on behalf of the general population and give voice to a private derision.

This derision seems to be directed at proposed pagan rituals which appear so malevolent to non-pagans that many of them even fear for the innocence of local children. Rushing echoes this fear when he says, "We will make sure they conform to the law, particularly as it involves minors". One of the reader comments in Anderson's article sums up this sentiment with a particularly fiery, evangelical zeal:

Its [sic]no longer about freedom to do as we will when we invoke the wrath of God for all of these [p]agan rituals. I am only quoting from THE BIBLE[;] nothing I said is from anywhere but THE BIBLE, the book that this country should be standing on as its savior, but all of the pagans and atheists have turned their back on God and have chosen to go their own way and worship a god which is no god. There is only one God, The God of The Holy Bible, and all of those who oppose Him according to The Bible will face the wrath of God. God said it not me. And true Christianity is not anything like what DMJ said it was. Read The Bible and get a clue and stop following these pagan religions that just allow you to fulfill your sexual and primal lusts and exposing [sic]it to children[;] you should be ashamed of yourselves, and you will be ashamed when you stand before God. God Help you. In Jesus [sic][n]ame, stop this, Amen.

Such unyielding conviction. But exactly what activities are scheduled to take place at the festival, which is described by its organizers as Louisiana's only "dedicated pagan camp" and a "nationwide pagan fest"? According to Anderson, the event will feature "nightly drumming circles, bonfires, Celtic music, pagan spiritual music, belly dancers, fire dancers and authentic voodoo rituals" as well as guest speakers who will teach about Druidism, mantras, and other esoteric knowledge. How could children be violated by fire-dancing, spiritual music, bonfires, and drumming? Perhaps it is the thought of young eyes gazing on the uncovered flesh of belly-dancers which so discomfits Rushing and others from the Sherriff's Office, but on its Web site, the event's organizers state, "This is a clothing ONLY event", so, again, we might wonder why the cause for concern; one might also point out that it is routine for mothers to nourish young babies by placing their mouths on their naked breasts, making a panic over partial nudity seem even more ridiculous.

"But what is the big deal?" the average reader might ask, "The Sherriff's Office stated it will not interfere with the event if the law is respected". The big deal is that local authorities have interfered with the free exercise of religion. In 2007, Livingston Parish actually passed an ordinance banning fortunetelling and soothsaying; Clifton Eakins, an ordained Wiccan minister under whose name the campground received its occupational license, sued the parish over the ordinance, arguing that the law should treat divine knowledge received through Wiccan ritual as equal with divine knowledge received through a Christian one. In federal court, U.S. District judge James J. Brady ruled that the ordinance violated the U.S. Constitution since it discriminated against a particular spiritual practice, arguing that an idea cannot be prohibited simply because it is disagreeable to others. The irony, then, is that it was the Livingston Parish government, not local pagans, which violated the rights of citizens.

Personal prejudices have certainly worked their way into government operations in Livingston Parish and sometimes even contributed to institutional discrimination, which is all the more reason to stand on guard against this trend, which is perhaps best achieved by taking a proactive approach and providing education. One way to do this is to join the discussion at the ULCM Facebook page "We Don't Tolerate Hate", where you can make your voice heard to promote understanding of marginalized faith groups.

Visit our Guide to Divinity to learn more about earth-centered religions.