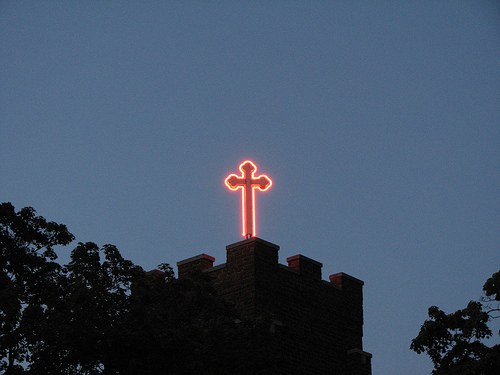 Mission Accomplished? Not yet.

You may remember this story from last week. On Sunday, September 28th, 33 pastors from around the country violated IRS law by speaking out in favor of John McCain from the pulpit. With the backing of conservative support group, the Alliance Defense Fund, these pastors hope to provoke a response from the IRS and incite a legal battle.

the Alliance Defense Fund, of Scottsdale, Ariz., has long argued that the tax code barring clergy from backing candidates from the pulpit is unconstitutional. The Alliance enlisted 33 pastors in its campaign to give sermons that would spark an Internal Revenue Service inquiry and a legal battle that could get the tax law overturned...

Briefed on the content of the sermons by Messrs. Card, Emrich and Bacon, Donald Tobin, associate law-school dean at Ohio State University and a former Justice Department attorney, said they all broke the law. "He's using church resources in order to make his endorsement known. That's a violation," Mr. Tobin said, referring to Mr. Emrich in Wisconsin. "It's going to be very difficult for the IRS not to take action" against the protest, he said. "They may go after the most egregious....They can't in any kind of good administration of the Internal Revenue codes allow people to blatantly violate them."

It seems that, for better or worse, these pastors are getting the first item on their agenda met: publicity.

The constitutionality of the pastors' claim remains to be tested, and they will be battling against public opinion.

But a new national survey from Nashville-based LifeWay Research found that most Americans want pastors to steer clear of politics.

Some 74% strongly disagreed with the idea that pastors should be able to endorse candidates during a church service and another 13% disagreed somewhat. Only 5% strongly approved of pulpit endorsements.

This research seems to indicate that Americans really do want a 'separation of church and state'; it's going to be a while before we can agree on where to draw that line.
- Wall Street Journal
- USA Today