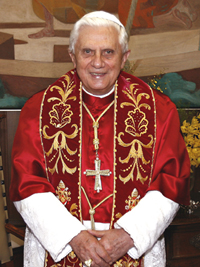 In aunsurprising decision, the Pope chose to reaffirm the Catholic Church's opposition to contraceptive devices. Making his announcement from Vatican City, Pope Benedict XVI explained that the church supported, "natural solutions to infertility," however using contraception, "means negating the intimate truth of conjugal love, with which the divine gift (of life) is communicated."

Though this announcement was anticipated, it was prompted by the appeal of Catholic groups worldwide.

The message came two months after an appeal for a retraction by some 60 Catholic groups who said the Church's stance had been "catastrophic" for the world's poorest and weakest...
[An open letter of dissent] said the impact of the 1968 encyclical had been "disastrous in the southern hemisphere, where the Catholic leadership exercises considerable influence on the politics of family planning." A spokesperson from the Vatican was on hand to offer additional explanation,

Vatican spokesman Federico Lombardi said the July appeal was not about expressing a "theological or moral position but paid propaganda in favour of the use of contraceptives."

"The spread of AIDS is totally independent of the religious denomination of populations and of the influence of religious hierarchies," Lombardi said, adding that policies aimed at preventing the spread of HIV through condom use had largely failed.

The church has defended its stance on contraceptives for the last 40 years, and following Pope Benedict's announcement, it seems unlikely to change in the near future.