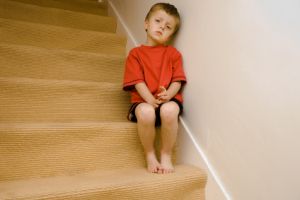 Civilized and rational people have been given yet another reason to fear religion as a potential source of violence. A man in the rural southern United States savagely beat his child with a wooden rod and told police afterward that he was following the teachings of the Bible. The case further illustrates the problems which arise when modern-day people cling unthinkingly to the primitive traditions of semi-barbaric, Bronze Age societies.

The man, 50 year-old Stephen W. Cooper of the small town of Crestview, Okaloosa County, Florida, told investigators from the local sheriff's office that when his child became unruly he took a wooden dowel and beat the child because this is what the Bible teaches. It was no mere swat, either: the child was left with deep purple bruising. According to Wendy Victora of The Destin Log, the police report said that "[t]he bruising was still visible on the child's arms and buttocks five days after the incident, indicating deep tissue [damage]." The sheriff's office did not condone Cooper's Judeo-Christian disciplinary methods: police charged him with felony cruelty to a child without great harm. (Of course, "great harm" is relative the harm was great enough to cause pain and injury.)

But the story does not end with the beating itself and Cooper's subsequent (deserved) arrest. Perhaps most irksome about Cooper's stupefyingly arrogant attitude is that he would probably do the same thing again if he saw fit. As Victora reports, "Cooper told Department of Children and Family investigators that he could not make any promises he wouldn't use the dowel again." Literally adding insult to injury, he also declined to co-operate with department investigators in an effort to reform his behavior: "He also refused to sign or agree to a safety plan", says Victora.

So what does the Bible really say about physically punishing children? The truth does little to dispel myths about Biblically-inspired child beating; in fact, it may even confirm them. According to B.A. Robinson of Ontario Consultants on Religious Tolerance, a great bulk of the teachings on punishing children come from the Old Testament book of Proverbs, which is commonly attributed to King Solomon but may include the teachings of so-called "wise men" who succeeded him and drew on older Judaic traditions about corporal punishment. The following are the most common passages (from the King James Version) used to excuse the practice:

Basically, the idea is that if you are not beaten for being recalcitrant, you make your family members look bad (saving face is always a preoccupation of the paranoid) and you burn in hell for eternity. Oh, and it is not really that bad to be beaten after all, you are still alive, even if you are left grievously injured and in pain. This primitive mindset almost reminds one of the honor-killings in many countries founded on the tenets of the Islamic faith, where young rape victims have their throats cut for purportedly seducing men with their feminine wiles and bringing shame upon their families, or where women are stoned to death for having sex with men other than their husbands.

Many of our readers will already be perched up on their seats with the traditional counter-argument at hand. Usually this goes something like, "I was spanked as a child, and I turned out fine." But this is relative. Relative to a bruised and broken child, you are unharmed, but relative to a child whose parents can find more diplomatic means to alleviate their rage, you have most certainly felt the sting, both literally and metaphorically. Even if one is not severely injured by a spanking, and even if one is not dealt long-term psychological wounds, it still causes pain and distress for the child at the time, and it instills in them a fear of their parents. It is impossible to know whether one has turned out fine unless one is able to compare their childhood to that of a person whose parents never struck them. At what cost does one maintain order and control through corporal punishment, and is the lesson worthwhile?

The sole doctrine of the Universal Life Church Monastery is that every person may do what he or she believes is right so long as this does not impinge on the rights of others namely, so long as it is legal and does not harm another person. The case at hand is about children's rights. What people like Cooper do is both harmful and illegal and is a violation of the right to physical safety, and hence it cannot be protected as a religious freedom just as it is not a religious freedom to beat women or deny them employment. These things are non-negotiable. But we invite you to share your thoughts. Should parents beat their children because their sacred book tells them to?