Is The Bible a Work of Fiction? 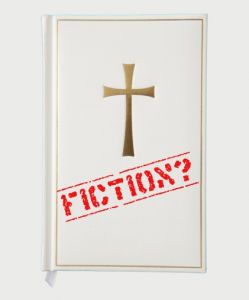 How would you categorize the Bible? Warehouse wholesaler Costco has been criticized by devout Christians in recent days for labeling copies of the holy book as "fiction". The company has since apologized for what they call an unfortunate error, but the fiasco has raised an important question: should the Bible be viewed as a work of fiction, or not?

The controversy arose recently at a Costco store in suburban Los Angeles. The labelled Bibles caught the eye of Pastor Caleb Kaltenbach, who later tweeted about what he saw. "All the Bibles were labelled as fiction. It seems bizarre to me", he told Todd Starnes of Fox News. Later, more of them popped up in the town of Manchester, Missouri. Former teacher Mary-Margaret Meyers-Walker noticed the Bibles surrounded by books like Grimm's Fairy-Tales and offered to move the books to the "correct" section, later saying that if the store did not do so, she would ask Christians to boycott the company.

For people like Meyers-Walker, the Bible is a work of nonfiction because it contains factual elements. As she explained to the local media, "Jesus is a true person; whether anyone wants to believe in the faith", therefore the Bibles were misplaced. The counter argument is of course that the presence of factual elements does not make a work as a whole factual. For example, no one would claim that the Hollywood blockbuster Abraham Lincoln: Vampire Hunter is non-fiction just because Abraham Lincoln was a real person. Factual elements do not equate with factual narrative.

This situation begs the question as to whether or not fiction or non-fiction are appropriate labeling options for religious texts. The Quran features numerous figures and place-names that have a basis in reality, but so do many Greek myths and legends. Likewise, many pagan traditions focus on seasonal cycles based on real-life astronomical events. Even if we argue that the Bible contains historical accounts, is that really the defining aspect to the book?