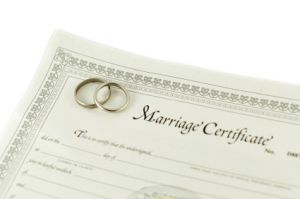 The number of friends and family members who officiate weddings has been increasing in recent years, while the number of judges and ministers belonging to traditional hierarchical religious organizations has gradually decreased. While the growing trend of weddings performed by friends and family has its supporters, it also has its critics, revealing a persistent suspicion in some people's minds over the validity of such weddings. The greatest caveat critics have appears to be over their legal status, as well as the seriousness with which they are performed, but this resistance ultimately reflects a fear, on the part of conventional religious denominations, of losing control over the general population.

Rumors about the "scam" of weddings performed by ministers ordained online have circulated among traditional ministers as well as legal scholars who are not privy to the official operations of churches which grant online ordinations, but who nevertheless avow that such organizations must not be in line with the legal criteria for churches set forth by the Internal Revenue Service in the United States.

One of these critics is attorney Ray Dague, who specializes in religious and matrimonial law. According to Dague, online ordination is "a scam", which does not "'cut the muster" with the state of New York or any other state in the United States, simply because, obviously, you can sell a certificate for a few bucks, but that doesn't make you a clergyman". He adds, "[y]ou've got to have some kind of a recognized congregation". But Universal Life Church Monastery, which grants free online ordinations, does have a recognized congregation which meets at its Le Jardin Sanctuary in Seattle; furthermore, it becomes a dangerous practice for the government to impose rigorous restrictions on the definition of a congregation should Wiccans be banned from performing legal weddings simply because their meetings in homes or forest groves may not meet the definition of a regularly convening church congregation in the Judeo-Christian sense? Should the congregation be enclosed in four walls, and should there be an arbitrary minimum of, say, twenty-five members present? Should it be on a weekly basis? The imposition of restrictions on the definition of a congregation then borders on discrimination and preference for one religious tradition over another clearly forbidden under the establishment clause of the First Amendment to the United States Constitution. (Visit our Web page on U.S. and international marriage laws for more information.)

Then there are priests, ministers, and pastors from traditional religious organizations who challenge the practice of weddings officiated by ministers ordained online. Many of these clergy members claim that traditionally trained clergy who belong to traditional hierarchical organizations offer something to the community that ministers ordained online cannot. Rev. James Wind, president of the Alban Institute, a research firm specializing in religion, is one of these individuals. In Wind's view,

When we do a wedding ceremony, there's a set of values that has been carried along for centuries in these religious communities that are resources for making this very important relationship, a bedrock relationship in our society, for making this work.

But, ironically, it is just such obsolete "resources" which many modern brides and grooms have deliberately eschewed the "set of values" which individuals such as Wind endorse often do not meet the modern-day needs and interests of those who end up seeking friends and family to officiate their weddings. For example, most centuries-old value systems proscribe same-sex marriage and weddings, so same-sex couples would obviously find no reason to solicit the services of a priest or minister who subscribes to such value systems. Moreover, by denying marriage to such couples, traditional clergy actually impair the strength of the community, since they refuse to recognize the loving bonds and families that even they themselves admit are foundational to communities. This is precisely why churches such as ULC Monastery exist to provide such services to the community in order to strengthen it.

So what makes weddings performed by friends and family ordained online a viable option? There is good reason to believe that weddings performed by ministers ordained online clearly illustrate the sanctity and solemnity of marriage. For Kate and Ed Kochem, their ceremony was all the more profound because Kate's aunt served as the officiant. "It really made me feel more like part of Kate's family", said Ed, "[a]s opposed to someone that I don't know, some judge or pastor that I rarely see doing the ceremony. With Kate's aunt, it really seemed like I was becoming part of her family." So, again, it seems ironic to insist that weddings solemnized by strangers are more "sacred" than weddings solemnized by friends and family just because those strangers have the authority to wield a gavel, and when friends and family know the bride and groom so intimately. In fact, what seems truly blasé and irreverent is the practice of hiring personnel such as county clerks to grant legal marriage licenses perfunctorily and with little interest to total strangers just because those strangers have the right set of chromosomes and genitals, regardless whether or not they love one another.

The insistence that legal wedding officiation should be restricted to conventionally trained and ordained clergy members and magistrates stems more or less from an irrational attachment to tradition and a delusion about what is best for the couple and the community as a whole. (But, then, it is questionable whether or not the community has any concern in affairs involving only two people.) Traditional marriage is the vestige of an ancient practice in which tribes and nations forged alliances by buying and selling one another's women; it has little to do with the actual phenomenon of love between two persons, and more to do with the institutional manipulation of people's affections for the purpose of political and religious control. So, really, we should start viewing weddings officiated by ministers ordained online less as a curse and more as a boon to the institution of marriage, which, at least in its modern sense, connotes a loving union.