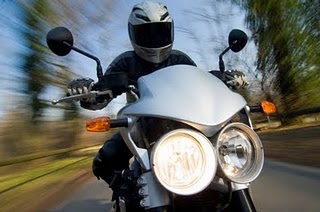 The belief in the efficacy of certain forms of "magic" or whatever one wishes to call it has not died out in the West; in fact, the practice of harnessing unexplained or mysterious forces to heal, guard, or protect the individual has in many cases simply adapted to the demands of modern life. In a previous post, we discussed the blessing of laptop computers and mobile telephones at a London church on Plow Sunday, a traditional holiday when the laity left their ploughs on the church porch to be blessed by the clergy. A similar custom has now taken root in the small town of Pocatello, in the U.S. state of Idaho, where one church is hosting an annual motorcycle blessing ceremony, showing that our desire to affect our world through unseen methods is alive and strong.

The latest ceremony was held at a recent Sunday morning worship service at Calvary Alliance Church, where more than one hundred motorcyclists gathered outside to have their vehicles blessed before taking to the streets of the town for the fifth annual Blessing of the Bikes. "For the riders", reports Genevieve Judge of Local News 8, "this has become a tradition to prepare for a busy riding season. They see it as a necessary and welcome event to keep them safe and together." Pastor Jim Jones of Blazing Grace Church said, "I don't care what walk of life they come from[;] it's important to them to have their bike blessed before the ride season. It is something that gives them a peace [sic] spiritually, and it just allows them [never to] worry about things". But the ceremony at Calvary Alliance did not neglect its human congregants, and, in addition to the blessing of motorcycles, said Reverend Jones, the church carried out baptisms for fifteen of the motorcyclists present. The amusing and unconventional spectacle was topped off with lunch before the riders headed out on to the streets of Pocatello.

Already, the more skeptical among us will ask questions such as, "does such a practice really work?" or "why would God stop what he or she is doing in order to consecrate a few motorcycles?" Similar questions have been asked about prayer, and the same people want to know whether it works to ask God to heal people and even whether prayer can be scientifically tested in the first place. One of the most overlooked points which proponents of prayer and ritual blessings make, though, is the psychological benefit it may have on the very person who does the praying or who seeks the blessing. As Pastor Jones points out above, the act of consecrating a motorcycle gives the rider a sense of spiritual peace. Even if there is no supernatural force at work in the use of holy water, and even if a successful bike ride is just the result of a placebo effect or some sort of psychosomatic influence by the mind on a person's physiology, such an effect would not have been possible if the rider had not sought the blessing, because it was the blessing which instilled a sense of confidence in the individual in the first place, no matter how subconsciously. (This is a common observation in the determinist philosophy of thinkers such as Robert Blatchford.)

Holy water, anointing oil, smudging sage, and other supposedly magical forms of healing and protection against natural phenomena may really work but for largely psychological reasons. After all, human beings are highly visual, kinesthetic creatures who thrive on ritual and ceremony in order to affect their environment, and we find magical practices in almost all faiths, whether Baptist, Buddhist, or Wiccan. In this sense, perhaps we should start viewing these things less as the useless trappings of superstition, and more as tools which facilitate concentration and willpower, as well as enhance the mental state of the practitioner. What could be more mundane than that?