Atheist Returned to Prison for Beliefs 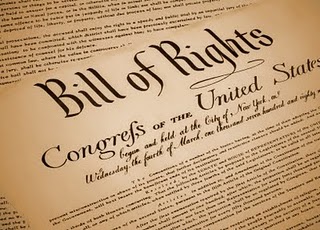 In the United States, we like to think that the First Amendment to the Constitution is an automatic guarantee that each citizen has the right to practice the religion of his or her choice, or no religion at all, and that the state will make no law which reflects an establishment of religion. Many local jurisdictions within the United States, however, have failed to put this fundamental principle into practice until they are finally put to the test and prodded into doing so. Indeed, the relation between church and state has proved so complex and nuanced that, in many cases, First Amendment rights have been violated unbeknownst to the casual observer. This fact only shows how much vigilance is necessary to protect people of all faith groups including those who belong to none.

It was under such circumstances that 41 year-old computer technician and parolee Barry A. Hazle, Jr., of Redding, California, was returned to prison by his parole agent, report Denny Walsh and Sam Stanton of The Sacramento Bee. After serving a one-year sentence at the California Rehabilitation Center Norco on a drug possession charge, Hazle was ordered to attend a ninety-day in-patient drug treatment program as a condition for his release. Hazle agreed to this condition, but he clarified to prison officials before his release that he wanted to attend a treatment program "that did not contain religious components", according to federal court papers; nevertheless, he was assigned to Empire Recovery Center in Redding, a twelve-step program operated by Alcoholics Anonymous which is characterized by a strong evangelical, religious tone and references to God. When Hazle asked to be moved to a non-religious treatment facility, he was told incorrectly that there was none in Northern California, and his parole agent, Crofoot, told him he had to continue at Empire or he would be returned to prison. Hazle remained there for a time, but submitted a written appeal to Crofoot on 3 April 2007. Three days later, Empire staff-members notified the parole agent that Hazle was being "disruptive" yet still "congenial" and that same day Crofoot arrived, arrested Hazle for refusing treatment, and had him locked up in the Shasta County Jail. Eventually, Hazle was returned to prison and spent over three months there.

He was, in essence, imprisoned for being a conscientiously objecting atheist.

Hazle finally turned the tables on his parole agent and the state in September, 2008, when he sued officials with the California Department of Corrections and Rehabilitation. The department responded one-and-a-half months later with an injunction stating that parole agents have no authority to force parolees to partake in religious-inspired treatment if the parolee objects to its faith-based approach. At the trial, the state maintained that Hazle was returned to prison because of behaviour which interfered with the program's operations, but U.S. District Judge Garland E. Burrell, Jr., and even Crofoot himself, disputed this claim and pointed out that Hazle was not violently or wilfully obstructing the program's operations rather, he was peacefully resisting participation in it. The judge ultimately ruled that the state's argument lacked sufficient evidence, and that it impinged on Hazle's right to freedom from religion as guaranteed by the Constitution. The lawsuit remains in litigation, and a trial-by-jury is set to begin 22 June 2010 to determine whether and how Hazle's constitutional rights were violated; meanwhile, monetary damages are to be agreed upon either by trial or settlement.

The distinction between obstructive behaviour and peaceful non-participation or resistance is important in such a case, but even if Hazle had interfered with the successful operation of the program, should he still have been returned to prison for it? After all, the only reason he would have shown such behaviour would be the fact that he was compelled to participate in religious-themed treatment in the first place. The real source of the problem, then, is not any reaction on Hazle's part, but rather the state-mandated attendance of a treatment program the core principles of which reflect a specific theology or doctrine and which conflict with the beliefs of the participant; moreover, once Hazle had shown any disruptive behaviour, the department could have resolved the dilemma immediately by moving him to a secular treatment facility, which they should have done at the outset upon hearing his first objection; hence it is the department's negligence which is ultimately to blame.

Ideally, state officials would take it for granted that a state-mandated treatment program should consist of a secular arrangement of professional therapists, science-based curricula, and drug-abuse rehabilitants, and not preachers, sermons, scripture, and a congregation of potential converts, but this assumption often falls by the wayside when such officials pretend that their position gives them immunity to carrying out constitutional obligations.

As a non-denominational, interfaith church which defends freedom of and from religion, Universal Life Church Monastery finds the actions of the California Department of Corrections and Rehabilitation unethical, unfair, and unconstitutional. We would like to know if any of our ordained ministers have had similar experiences, and, if so, we invite them to open up a discussion on the issue in our ministers' forum.

Read our Guide to Divinity to learn more about atheism, agnosticism, and non-religion.