Ever Heard of the 'Slave Bible'? How Christians Used the Sacred Text to Support Slavery

Throughout history, the Bible has been edited and rewritten by individuals trying to advance particular points of view.

And we’re not just talking about King James. Since the Bible’s existence, countless individuals have molded the Bible to fit their individual worldviews.

There’s the Jefferson Bible, for example, edited by Thomas Jefferson to remove all supernatural elements from Jesus’ story. There’s a Gen-Z edition of the Bible that rewrites the entire holy text in Gen-Z vernacular (it is reportedly bussin’).

There’s even a Duck Dynasty edition of the Bible, with editorial notes from the stars of Duck Dynasty within.

But perhaps the most controversial edition of the Bible ever created just went on display in a Dutch museum: the Slave Bible.

What is the Slave Bible?

The Slave Bible – officially titled "Select parts of the Holy Bible for the use of the Negro Slaves in the British West-India Islands" – was first published in 1807 for use by Christian missionaries in the British West Indies. Missionaries wanted to Christianize and educate the enslaved Africans in these Caribbean nations, and the Bible was a common tool for both. But they also wanted to quell any pesky thoughts the slaves might have about freedom or rebellion.

Enter: The Slave Bible. With all passages relating to freedom, slave rebellion, or revolts excised, this majorly abridged version of the Bible was intended to be used by colonizers to convert slaves to Christianity without provoking any thoughts of slave liberation. 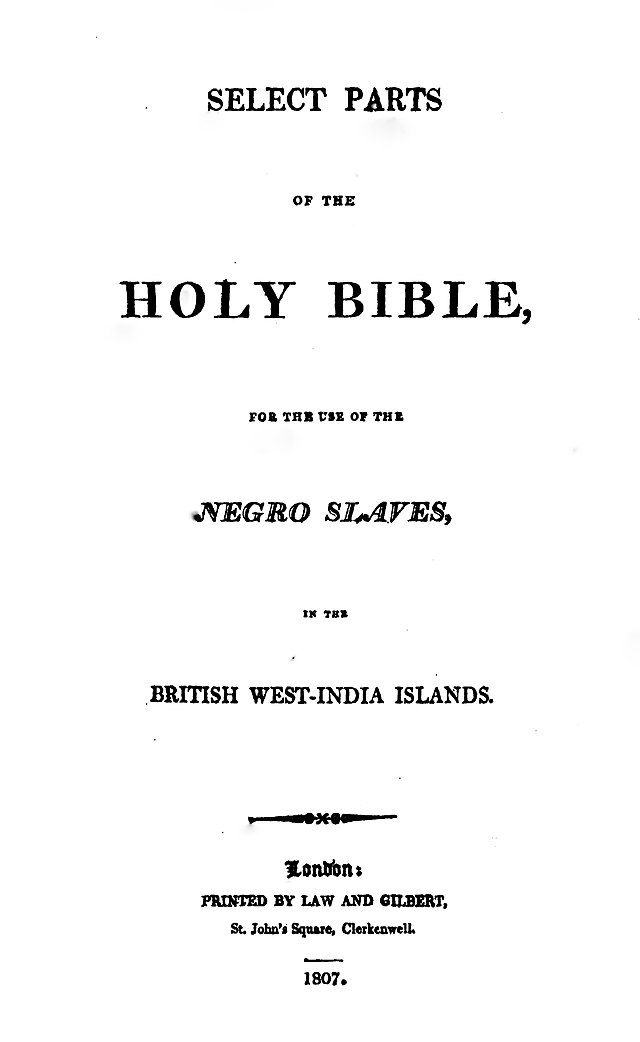 And we are talking majorly abridged. There are 1,189 chapters in a typical Bible… the ‘Slave Bible’ cuts that down to a measly 232. Such removals include some of the most famous parts of the Bible; entire passages of Exodus, where Moses demands the Israelites’ freedom, are removed, for example.

Of course, not every verse relating to slavery was omitted. Some, like Ephesians 6:5, made the cut:

‘Servants, be obedient to them that are your masters according to the flesh, with fear and trembling, in singleness of your heart, as unto Christ.’

One of only three known copies of this incredibly rare book is now on display at the Museum Catharijneconvent in Utrecht, Netherlands. It so badly deteriorated that it requires special handling.

Scholars say that the Slave Bible, likely directly inspired by the Haitian Revolution, should help us understand the lengths some will use to distort faith for their own benefit.

"In omitting all references to freedom, it is a powerful and chilling reminder of how white Christians manipulated and misused even sacred texts to control the enslaved and legitimize slavery," says Julie Gardham, a senior librarian at the University of Glasgow.

The creators of the Slave Bible were “really highlighting portions that would instill obedience,” explains Anthony Schmidt, curator at the Washington, D.C.-based Museum of the Bible.

Despite the slavers’ best efforts, the endeavor to keep the word ‘freedom’ off the tongues of slaves was ultimately a failed one.

As one spokesperson for the Catharijneconvent museum explained, “[the omissions] did not prevent faith from taking root on the plantations… The passages about freedom that were omitted turned up in spirituals, the songs of enslaved people in the United States.”