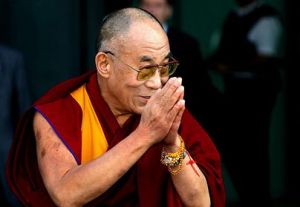 We often think of the Dalai Lama as the foremost exponent of forgiveness and clemency, but we might be surprised to find out what he suggested at a recent lecture at an American university, during which he brought up the recent slaying of Osama bin Laden. The Dalai Lama's surprising answer suggests that what the American forces did to Bin Laden was only just and necessary, and it presents some interesting, and perhaps unexpected, philosophical questions for us to consider, such as when it is necessary to take the life of another human being.

The former political leader of the exiled Tibetan government spoke in front of an audience of 3,000 at the University of Southern California Tuesday, 3 May about the ethical question surrounding the extirpation and killing of bin Laden, the founder of the al-Qaeda terrorist organization and member of the wealthy Saudi bin Laden family who masterminded the September 11 attacks in the U.S. as well as other military and civilian massacres. According to the Associated Press, the Dalai Lama said that bin Laden may deserve compassion and forgiveness since he is a human being, but they quote him as also saying, "[f]orgiveness doesn't mean forget what happened." He implied his support for U.S. actions by saying that counter-measures are sometimes necessary.

Based on our understanding of Buddhist doctrine and philosophy, and the importance it places on compassion for all living things, what are we to think of the Dalai Lama's words? What he might be doing is giving us a utilitarian argument for taking the life of bin Laden. Utilitarianism basically states that sometimes a single person must die or be harmed in order to prevent a greater number of people from dying or being harmed. In other words, it states, sometimes a sacrifice must be made for the greater good. This contrasts with other philosophies such as virtue ethics and deontology. Virtue ethics states that the rightness of a person's actions is based on that person's overall character or virtue, while deontology states that the rightness of a person's actions is based on rules, behavior, or the way in which an action is carried out. Another ethical philosophy, consequentialism, states that the rightness of an action can be determined by the outcome or consequences of the action.

Today most of us in the West extol, or feign to extol, the principle of natural or inherent equality. Nobody is born evil, suggests this principle, or if a person is born evil, his or her behavior can be reformed given the proper efforts and resources. Utilitarianism also implies everybody is equal, since it suggests that one life (i.e. bin Laden's) is not worthier than multiple lives (the victims of 9/11). If one person's life cannot be valued or protected over the lives of many, and if bin Laden's remaining alive constituted a threat for many, one might suggest that his death was necessary. This is one interpretation of the argument the Dalai Lama presented at his lecture. But, he suggests, this still does not mean we cannot forgive; rather, we can show forgiveness, forbearance, and compassion while doing what is practical and necessary to protect other people out of the same compassion. In the end, then, the decision to act rests on an understanding of who most benefits from that compassion.

This message is probably lost on the ears of most Americans who are celebrating the al-Qaeda leader's death. By now we are familiar with images of right-wing, largely evangelical Christian jingoists parading around in American flag t-shirts, waving their American flag in hand, chanting (much like a crowd of ululating Muslims), and clapping their hands to their chests in an bizarre mixture of religiosity and nationalism. Understandably, people should breathe a sigh of relief now that the mastermind behind the 9/11 attacks has been killed, but

Maybe this misses the point of the Dalai Lama's message. While such action may have been necessary, perhaps our zeal should be tempered by a sense of sorrow and tragedy not tragedy in that the threat has been eliminated, but tragedy in that it had to come to that. Ideally, all of this bloodshed could have been prevented in the first place, and maybe it is our responsibility to find out how to do that in the future.

Of course, it may be as simple as the Dalai Lama tempered his words to appease an American audience jubilant over the death of their worst enemy. Who really know?