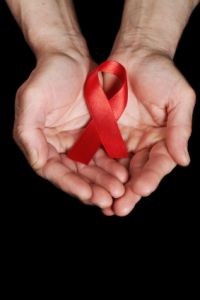 With all of the scandals that have rocked Christian churches lately, it is nice to see that a cluster of them have shifted the focus back toward philanthropy and taken up the cause of HIV awareness and prevention. Over two dozen churches in Chicago have offered free HIV screenings to their congregants as part of an effort to stem the spread of the disease in the black community. The churches' efforts show that the frivolous fixations of the fundamentalist, evangelical right-wing have not totally stolen the show, as it were, from traditional public outreach to the less fortunate.

Needless to say, Christian denominations do not enjoy a reputation for being particularly proactive when it comes to reaching out to people living with HIV (especially since many of them believe it is a punishment by God for homosexual behavior), but this may be changing. The participating congregations comprising a population of some 35,000 members have offered the screenings in their churches in order to combat the lingering stigma against HIV and AIDS, to improve the role of religion in HIV prevention, and to stem its spread in the black community.

Imagine what it would be like if you could go to your local church to find free preventative health services. Actually, there is no need to imagine it. Take the example of Southlawn United Methodist Church, in Chicago's Avalon Park neighborhood. Last Sunday the church offered free screenings to at least 40 people during what has been christened the First Ladies Health Day. After the sermon, people chatted and mingled over coffee while they waited to have their cheeks and gums swabbed. But the services did not end there the church also offered its members free high blood-pressure and diabetes testing.

Women have been at the forefront of the campaign. The concept for free testing in churches was devised last summer at the First Ladies Luncheon, where a consortium of ordained female pastors and pastors' wives from Chicago area churches agreed on practical measures for addressing the problem. Jamell Meeks, chairwoman of the luncheon, noted the dramatic change resulting from their efforts: paraphrasing Meeks, Kristen Shorsch, of the Los Angeles Times, reports that "75 per cent of the churches that participated Sunday never before offered HIV testing" a good example how crucial personal drive and initiative is to effecting change.

The increased effort at HIV and AIDS awareness in black churches is especially important given the disproportionately high rate of HIV contraction among members of the black community. According to the AIDS Foundation of Chicago, blacks in Chicago are affected by the epidemic far more than other racial groups, reflecting a national trend. "Blacks represent about 37 per cent of the city's population yet account for 56 per cent of people living with HIV", reports Shorsch, quoting statistics from the foundation. Of course, the ultimate goal is to eradicate the disease entirely, but the data further illustrate the racialized nature of the disease, and which communities require the most urgent attention in order to allocate resources efficiently.

It may seem a bit eccentric for churches to offer preventative health services, but shouldn't this be a normal thing for them to do? (A while ago we posted a story about how best to minister to the needy.) With all of the newspapers emblazoned with headlines about right-wing, evangelical Protestant churches protesting the funerals of veteran soldiers with "God Hates Fags" placards, hypocritical mega-church ministers stealing tithe money to finance forbidden sexual escapades, and Catholic priests molesting altar boys, it is a breath of fresh air to discover a handful of congregations who have gone back to their roots and attempted to live out the message and teachings of Jesus Christ that is, to help the poor, the weak, the destitute, the scorned, the diseased (and maybe find salvation in doing so). Rather than judge these outcasts for their "sins", or proclaim the disease as divine retribution for lascivious behavior, churches like Southlawn United Methodist have entertained the novel idea that maybe these people aren't being punished, and that maybe God wants churches to help them because they are suffering.

What do you think about the Chicago church campaign to spread HIV and AIDS awareness? Should more churches be taking a grass-roots, philanthropic approach to their ministry?