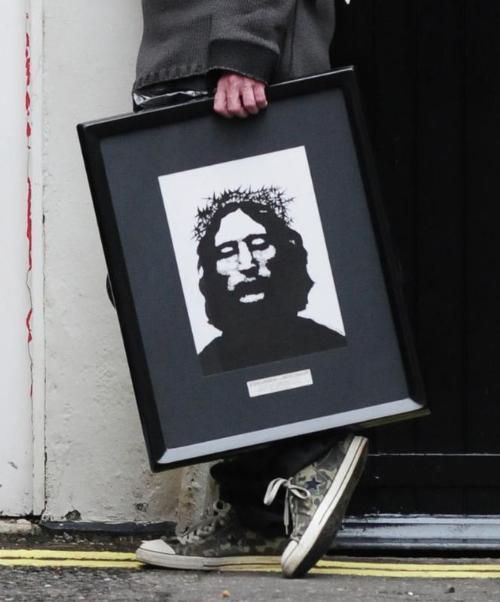 What Would Jesus Do?
A Note To Our Christian Friends In Regard to the Current ULC Monastery's Legal Defense Campaign

"The Universal Life Church Monastery recently announced a legal defense campaign that will take action in all states that have enacted unconstitutional same-sex sacramental marriage restraints. The Universal Life Church Monastery reports that "States that deny ministers the religious right to perform the sacrament of marriage, regardless of the couple's sexual orientation, do so in violation of the 1st Amendment of the US Constitution."
April 15, 2009

This proclamation is meant for the Universal Life Church Monastery's Christian ministers, friends & visitors. Its aim is to respectfully address a strong & respected population of peoples. It has specific hopes to answer the Christians query as to how they might reconcile their own moral values, based on their Christian beliefs, while simultaneously supporting the ULC Monastery's recent Same-Sex Sacramental Marriage campaign. In summation, this campaign seeks to protect, on a state level, the right of ULC ministers & all ministers for that matter, to officiate over same-sex Marriages. In a way what is addressed here may be quite a daunting pill to swallow. Some will agree with the thoughts herein; while others may find themselves in strong opposition.

All have such rights.

I assert & challenge each of you to consider that Christians can and should support this cause. This Same-Sex Sacramental Marriage campaign issue is not about changing one's believe systems or compromising Christ based moral imperatives. It is about reflecting accurately the One whom we as Christians claim to represent - Christ himself. As Christians we are required to not simply regurgitate Christ's message of unity, complete love, & tolerance; while our lives and behaviors toward our fellow man reflect differently. Our active lives; what the scripture's refer to as "fruit," should be a reflection of both the word & the active ministry of Jesus Christ.

Christ himself did not agree with all things. In fact, he was the ultimate rebel. There was much that he saw in the world around him & in people themselves of which he disdained. He witnessed the meshing political marriage between Church & State and hated it. He saw through the hypocrisy of the pharisees & religious leaders of the day and spoke against it. He observed the alienation & oppression of those considered "outcasts," and he welcomed them. He forgave prostitutes. He told a tale that anyone, regardless of what they had done, could return Home.

His supper table included all.

Does this mean that Christ approved of all - No. But one of the most daunting tenets of Christ himself was his support of the freedom of each person to choose. Some call it free will. Indeed, there were certain rights and wrongs in God's Law. Christ did not mince words when it came to telling the people of his day about them. But have you ever noticed that Christ never forced His will or his Father's will on anyone?

This brings us to the current ULC legal defense campaign. Christians, this is not about agreeing with same-sex marriage. It is about ensuring the equal rights, as guaranteed under the 1st Amendment & under God, of all peoples; regardless of gender, race, sexual identity and/or preference to freely practice individual lifestyles free of hate, prejudice & oppression. Further, it protects the separation between Church & State, granting ministers of ANY denomination the right to practice under the tenets & beliefs of their individual Church; free of governmental interference.

"Congress shall make no law respecting an establishment of religion, or prohibiting the free exercise thereof; or abridging the freedom of speech, or of the press; or the right of the people peaceably to assemble, and to petition the government for a redress of grievances."

Is this contrary to our beliefs as Christians? I think not... not if we separate ourselves from our emotions or individual beliefs & think as Christ thought - on a Global, larger scale.

Our job as Christians is to ensure that individual rights & freedoms here in the United States & abroad are protected & respected. This is in fact a large part of what we were founded upon as a nation. We don't have to agree with everyone & well we shouldn't. We don't have to support or agree with same-sex marriage. But we do have to agree with the right of an individual to agree with and support it; free of prejudice & hate, judgment or discrimination. Furthermore, we are required under the Law of the Land & under God to defend the constitutional God given right of individuals, working under any denomination, to perform same-sex marriage sacraments. Christ never forced his will upon anyone. And he certainly did not support the Law ruling over personal freedoms. We are to respect & obey the law, but be ruled by a higher force...

Here in the United States, regardless of an individuals beliefs or personal preferences, the State is not to be allowed to infringe on the individual. Our citizens own spiritual beliefs & actions stemming from those beliefs; is a business between them, God and the religious institution they affiliate with. Christian friends, believe it or not - this means ALL churches, ALL faiths & ALL ministers of such churches & their congregants.

We at the Universal Life Church believe in "Doing That Which Is Right." This has been the bedrock of who we are since Reverend Hensley's day. This does not mean that there are no moral imperatives. We recognize that there are. What are they? The rights of individuals to find God on their own terms, the rights of individuals to believe what they want & to form their own unions based on that belief regardless of whether an individual agrees or not & the right of all to seek their own slice of happiness here on earth.

The individual rights of ministers to perform same sex marriages; as well as the rights of individuals to marry someone of the same sex, is NOT a State defined issue. It is a personal issue; one which Christians themselves must protect. Christians may not agree with a particular individuals choices but they are biblically required to support & defend & love all God's children, not just those "perfect," "sinless" ones of us. For as Christ challenged: "Let he who is without sin, cast the first stone..."

In closing, allow me to leave you with a final thought. We live in a tumultuous world, one that is far more divided then it is united. Our children are leaving the Church, and Christ because of the hypocrisy they see in us their leaders. In the United States alone approximately 70% of people do not go to church at all. Within our "Christian" family, we separate ourselves in the over 3,000 different denominations - All claiming to represent Christ. We kill each other all over the world in the name of God. Outside the very front doors of our churches we place the homeless, or deviant; while we comfortably drink our lattes and sit in the front pew. Isn't it time we united? What does the world see of this man called Christ and the people who stand as ambassadors for him? Do they see love, unity, acceptance of free will & the individual even if they are different?