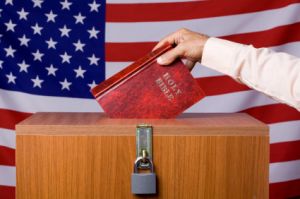 In a recent article on the "Faith and Reason" blog at USA Today, Cathy Lynn-Grossman discussed U.S. president Barack Obama's increased use of religious rhetoric in an effort to attract the support of evangelical Christians. Various experts have suggested that while this tactic might work for Republican presidential candidates, it will probably not work for Obama, since conservatives will doubt his sincerity while liberals will criticize his appeal to religion. Perhaps what Obama should be doing is not to play the religion card, but to stand up unapologetically for what he would seem to believe in secular civil government. As a Universal Life Church minister, do you share this opinion?

Grossman cites the opinions of various researchers in examining the usefulness of Obama's appeal to evangelicals, comparing the president's religious proclamations to those of conservatives like Rick Perry. John Green, director of the University of Akron's Bliss Institute of Applied Politics, suggests that it might be too late for Obama to sway conservative voters: Obama did recite Psalm 46 at the 9/11 memorial event in New York, and Psalm 30 at a memorial concert at the Kennedy Center that same night, but while he is now proclaiming his faith in the right context, he "didn't talk much about faith during his first two years in office and this has left 40% of Americans wondering just what, exactly, is his faith commitment". What Green implies and something which might cause nondenominational ministers ordained online to question the president's commitment to secular government is that Obama is using religious rhetoric as a mere campaign strategy at a time when it is crucial to do so rather than making a genuine statement of faith.

Perhaps more disturbing than this appeal to religious teachings at public speaking events is the president's apparent mixing of religious and national identities. University of Washington communications professor David Domke points out the president's increasingly complex and frequent invocation of God in public speeches, which he calls "a technique for making 'Christian' and 'American' synonymous". The president, Green argues, is "making a claim about the nation. There's no avoiding that this is a strategic emphasis on his part. He didn't speak this way when he was at 60% public approval". For ULC wedding ministers people who champion religious neutrality and church-state separation the implication is ominous. Green seems to be suggesting that even though he generally refrains from religious rhetoric at secular events, the president is cowtowing to the conservative argument that America is intrinsically a Christian nation merely in order to get re-elected.

Conservatives like Perry, however, can rely on religious political rhetoric in order to leverage public support, as Lynn-Grossman shows in her article. A quotation from the Associated Press illustrates the blunt sincerity which Perry widely considered a Christian dominionist espouses the purported Christian "roots" of the United States: according to the AP, Perry said that "America is going to be guided by some set of values. The question is gonna be whose values? It's those Christian values that this country was based upon". It is not a sentiment that sits well with people who become ordained online to solemnize nontraditional or non-religious weddings. In addition to this, Domke says that "[f]or a Republican, you need a prayer rally. For a Democrat, you just need an opening prayer and more than that makes liberals nervous." The essence of these observations seems to be that conservative candidates like Perry will succeed with conservatives in painting the U.S. as a fundamentally Christian country, while liberals like Obama (who is not very liberal) will fail not only with conservatives (who mistrust him), but also with liberals, who have lost faith in him as a strong voice of liberalism and church-state separation.

So, why should Obama even bother attempting to sway evangelical Christian voters with religious rhetoric which both comes across as patently sycophantic and belies his true, underlying principles? As pointed out above, he will probably fail with both conservatives who express suspicion over his sincerity and liberals who resent his appeal to conservative religiosity. Perhaps what the president should be doing is unabashedly embracing his dedication to secular civil government. If he were to do so, and if his words rang true and honest with the masses, he might end up with a greater base of support. And he would also be a worthy opponent to the Christian dominionists on the right who wish to turn the United States piecemeal into the Christian theocracy which, as John Adams wrote in Article 11 of the Treaty of Tripoli, it was never intended to be.

Your thoughts and opinions as a Universal Life Church officiant are important to us. Do you think Barack Obama should stop playing the religion card and start voicing support for the preservation of secular civil government?