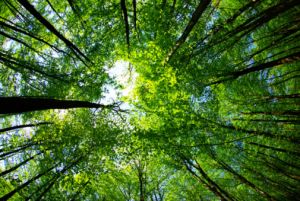 Can environmentalism be a religion? Of course it can, according to a Universal Life Church minister, Ken Layne. On his blog on Gawker, Layne explains that environmentalism shares many of the characteristics of conventional religion, but it is relevant to more people since the environment affects everybody. Although some ministers ordained online will cringe at the idea of "nature-worship", Layne makes some very interesting points which deserve close consideration.

There are myriad quasi-religious practices which give people a sense of meaning in life, Layne notes. Drunkenly cheering on your favorite local sports team or raving about the latest revolution in Apple computer technology provide people in the secular West a sense of community that used to be provided by traditional religion. Even science-fiction and comic book conventions offer this salve to modern-day isolation and spiritual malaise. Indeed even more traditionally established faiths such as Christianity assert that a specific type of dedication to something can make it one's religion (though of course it does so with the context that these religions are forbidden for Christians).

Strains of this eco-spirituality are already present in traditional religion. "All the big holidays already mesh with the original holy days, the winter and summer solstice and the spring and autumn equinox", Layne argues, adding that "there has never been a more ready-made religion with so many adherents". Pagans teach respect for Mother Nature, Christian stewardship theology teaches us to care for God's creation, and Buddhism emphasizes the importance of harmony between humans and nature. Atheists and other secularists have also long advocated the conservation of nature, just as ULC ministers have.

Maybe environmentalism is simply a modern-day incarnation of ancient nature worship. But everybody has a stake in it, Layne explains, because "it's all true, and it's based on both science fact and moral standards. You don't have to pretend to believe in ghosts or gods ". So, if something like Jedi can be a real religion, why can't eco-spirituality?