Women’s Roles and the Gospel of Jesus’s Wife 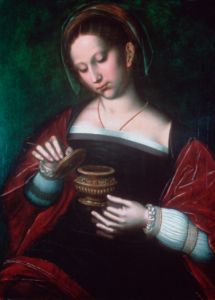 If it was ever discovered that Jesus had a wife, what would it mean for the future of the church? A couple of years ago, an ancient papyrus fragment was discovered which contained references to such a figure, quickly becoming the subject of intense debate. Now scholars have confirmed that the business-card-sized scrap of paper is indeed authentic, and not a forgery. The revelation has implications not only for priestly celibacy, but also the role of women in the church.

In the fragment, nicknamed by scholars The Gospel of Jesus's Wife, Jesus appears to be discussing his wife with his disciples. Not only does he admit to having a wife, but he suggests something highly unorthodox that she, too, is one of his disciples. In Line 3, he says, "Mary is worthy of it", followed by "[m]y wife" in Line 4. He tells his audience, "she will be able to be my disciple" in Line 5, and Line 7 adds further weight to the suggestion that he was married, reading, "I dwell with her in order to ". The fragment, written in Coptic, has been dated to some time between the sixth and ninth centuries, and possibly as far back as the fourth century.

Despite the paradigm-shifting nature of the fragment, scholars have cautioned against jumping to unfounded conclusions about their veracity. The worn and faded papyrus scrap does not prove that Jesus was indeed married, but rather it reveals that some early Christians believed that he was, according to Professor Karen L. King of Harvard Divinity School. If the document did prove Jesus was married (some of suggested his wife was Mary Magdalene), it would undermine centuries of Catholic tradition, which states that priestly celibacy is inspired by the celibacy of Jesus Christ.

If the document suggests anything, it is that early church attitudes about women's roles were more liberal than we might assume. "The main topic of the fragment is to affirm that women who are mothers and wives can be disciples of Jesus a topic that was hotly debated in early Christianity as celibate virginity increasingly became highly valued",says King. Indeed, in a recent interview, former U.S. President Jimmy Carter points out that it was not until after the third century that church leaders began viewing women's role as subordinate to that of men.

The Gospel of Jesus's Wife may not prove Jesus was married, but it does suggest that early Christian texts entertained the idea that women could be disciples of Jesus, just like men. And why shouldn't they? If we are all children of the same universe, full equality of the sexes in religious leadership is a fundamental principle.