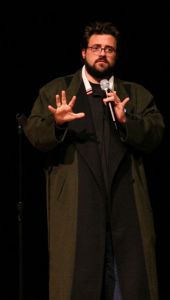 We have heard about retail weddings, extreme adventure weddings, and other alternative wedding ceremonies, but a wedding ceremony featured on a recent episode of Nightline might just be the first of its kind. Not only did the ceremony feature two grooms and an ice-hockey theme, but it was the first ceremony to be performed inside the Los Angeles podcasting theatre of film director Kevin Smith, who recently decided to get ordained online in the Universal Life Church Monastery.

On top of that, the ceremony, which was originally performed in February, was aired on the 22 April episode of ABC's Nightline as part of a segment about weddings performed by celebrity ministers such as Tori Spelling, as well as comedian and ULC minister Kathy Griffin. The grooms, Scott Loudon and Michael Wojtowicz, were ice-hockey fans and Los Angeles Kings season ticketholders who wanted once and for all to have their 16 year-long relationship formally recognized. The ceremony was replete with a hockey wedding cake and a "fan appreciation game" raffle.

It was only natural for Smith to serve as legal wedding officiant. Smith, who was dressed as a referee, is known for his gay-friendliness: not only did he make Chasing Amy, a 1997 film starring Ben Affleck that dealt with lesbianism, but his film Red State, to be released next fall, will supposedly include characters inspired largely by Fred Phelps, the pastor of the infamous Westboro Baptist Church. Many other celebrity ministers ordained in Internet churches, such as Griffin, have shown a similar support for same-sex marriage and other unorthodox forms of marriage.

The most inspiring thing about Loudon's and Wojtowicz's ceremony is that it sets an example: A wedding ceremony does not have to consist of a bride in a white dress, a groom in a black-and-white tuxedo, a flower girl, a ringbearer, traditional wedding vows, and whatever other trappings the traditional wedding consists of. Weddings like the one performed by Smith show other couples that they can be different and still have what everybody else has, because, ultimately, love is the most important thing, not procreation, nor even the approval of friends and family. And the fact that the event was aired on a major prime-time television news network is hopefully a sign that weddings performed by priests ordained online are becoming more acceptable.

The ULC Monastery would like to offer a belated congratulation to Loudon and Wojtowicz on their marriage and to Smith on performing one of his first wedding podcasts. We hope to see Smith perform wedding ceremonies for many more loving and committed couples seeking a place to have their unions recognized and affirmed.

(The entire ceremony can he heard on the official Kevin Smith online podcast.)