Two Steps Forward, One Step Back on Equality

Do states' rights trump individual rights? The Obama Administration recently announced that same-sex couples would be treated the same as opposite-sex couples; meanwhile, the Pentagon has extended eligibility for military benefits to same-sex partners of U.S. soldiers, but the state of Texas is resisting this latter requirement, citing states' rights. It is a dilemma which deserves a closer look, as your rights and abilities as ordained ministers and wedding officiants are affected.

The Lone Star State Strikes Back 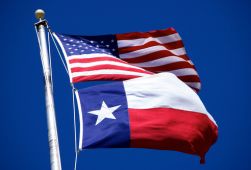 According to the Obama administration, both the Treasury Department and the Internal Revenue Service will allow legally married same-sex couples to file joint income tax returns, just like legally married opposite-sex couples. Perhaps most importantly, they will be allowed to do so even if they reside in a state where their marriage is not legally recognized. This means that if you perform a marriage for a same-sex couple in a state with marriage equality, they can then move (or return home) to a state that doesn't enjoy such rights, and still receive federal benefits.

Despite the federal government's new, more inclusive approach to taxes, the state of Texas is pushing back in other areas. The Pentagon has also announced that the same-sex partners of U.S. soldiers will be able to receive the same military benefits as opposite-sex partners if they are married in a state that recognizes same-sex marriage. In response, however, the Texas Military Forces (TXMF) has stated that it will refuse to comply.

A Battle of Rights

The TXMF has justified its stance using a "states' rights" argument, citing its status as a state agency. Major General John Nichols has argued that the TXMF is exempt from federal rules because it "falls under the authority of the Texas state government". But Stephen Peters, president of the American Military Partner Association, has countered that because the agency receives federal funding, it is required to follow the Pentagon's directive and provide benefits to same-sex spouses. It boils down to a basic question of fairness. Should a state agency be allowed to receive federal funding yet openly defy the conditions for doing so?