The Religion of Apple, Inc. 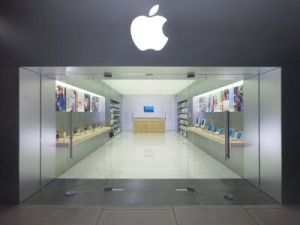 In previous blog entries we have discussed the definition of religion as well as the relationship between religion and technology. In addition, we have covered stories about how technology is being used for religious purposes (as with the Bible app for smartphones), and the use of retail stores to perform wedding ceremonies. In all of these cases, high technology has become inextricably intertwined with religious and ceremonial practice. Now there are suggestions that high-technology superbrands such as Apple, Inc., may in some ways constitute religions themselves.

The suggestion that Apple might be a religion, or at least provide a profound religious or spiritual experience, comes from a group of neuroscientists who conducted a study on the relationship between religion and the brain. Alyson Shontell of The San Francisco Chronicle reports on an upcoming BBC documentary on the subject called Secrets of Superbrands. According to the documentary, neuroscientists performed an MRI scan on the brains of Apple fans, then compared these to the MRI scans of people who called themselves "very religious", and found that the same area of the brain was active in both Apple fans and the very religious. In other words, they suggest, Apple technology stimulates the same heightened emotions in people as religion does.

It is not only brain scans that suggest that Apple resembles a religion. The way Apple stores are set up, as well as the way in which they operate, uncannily resemble the inspiring, uplifting ambience of a church, temple, synagogue, or other house of worship. Renee Oricchio of Inc says that "Apple Apple stores often feature stone or other types of austere, simple flooring like a church with products mounted on pedestals like individual altars". Apple store openings sometimes even resemble a Pentecostal or Southern Baptist religious service. "The scenes I witnessed at the opening of the new Apple store in London's Covent Garden were more like an evangelical prayer meeting than a chance to buy a phone or a laptop", Shontell quotes Alex Riley and Adam Boome of the BBC as saying. At this point, it almost seems as though superbrands such as Apple are deliberately capitalizing on religious zeal to attract loyal customers.

It is not hard to think of other superbrands which recall the same religiosity. Most of us who have stepped foot inside a Starbucks store are familiar with the grand, plush layout of the stores, the devotedness of staff, the philosophical thoughts and aphorisms printed on coffee cups, advertising slogans such as, "[t]his is what coffee tastes like when you pour your heart into it", and even a book by Joseph A. Michelli with the inspiring title The Starbucks Experience: 5 Principles for Turning Ordinary into Extraordinary. The ubiquitous coffee chain has created an inviting atmosphere with the attempt at nurturing a sense of community, much similar to a church lobby, banquet hall, or potluck.

It certainly seems as though superbrands make us feel good they comfort us, provide a sense of camaraderie, and create feelings of excitement and anticipation. In addition, however, they attempt to cultivate a populace devoted to an image, brand, or product being advertised as the best, the sole truth, or the only right way. Just as right-wing, evangelical Christians claim that the only way to heaven is by accepting the blood sacrifice of Jesus Christ, the geniuses at Apple persuade us that the iPod is the only true digital audio player mounting it up on a pedestal for all to adore while Starbucks tells us that the only real way to stay awake is to drink a cup of Starbucks coffee. In all cases, we are sold an experience of comfort and ecstasy on the condition that we accept the inimitable uniqueness of the entity conveying the product. In this sense, maybe Apple and all of the other superbrands out there really are religions of a sort.

Give us your thoughts as a pastor ordained in an interfaith church. Do you see a parallel between religion and big corporate brands?