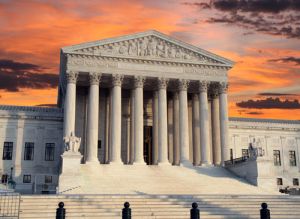 After months of deliberation, the United States Supreme Court has struck down a key provision of the country's Defense of Marriage Act (DOMA). The federal law did restrict U.S. federal marriage benefits to opposite-sex couples, though that was deemed unconstitutional. Another provision that regulates interstate-marriage recognition was upheld. The decision has widespread implications for the equal treatment of ministers ordained online as well as the people they marry: in a nod to religious freedom, the federal government will now grant benefits to same-sex couples married by Universal Life Church ministers in those states where such marriages are recognized.

The DOMA saga began in 1996 when the bill was passed by large majorities in both houses of Congress and signed into law by then-president Bill Clinton. Section 3 of the bill denies federal recognition of same-sex married couples for the purposes of immigration, the filing of joint tax returns, Social Security survivors' benefits, and insurance benefits for government employees. In the first decade of the twenty-first century plaintiffs challenged the entire law, which was repeatedly upheld by federal courts; however, more recently the courts have agreed with the plaintiff's arguments that Section 3 violates the U.S. Constitution. Additionally, despite their initial support, Clinton and several key legislators changed their position on the law after its passage, and in 2011 President Barack Obama ordered the Department of Defense to stop defending the law, although the Obama Administration was still required to enforce it.

Until the recent ruling, it remained unclear whether the Supreme Court would follow through with a decision on the law. On Thursday, 20 June, the justices delayed a decision on the constitutionality of DOMA as well as that of California's Proposition 8, the voter-approved measure that repealed that state's law legalizing gay marriage. As with other trials, a party is required to have "standing", or show that it has a substantial connection to a case, in order to be allowed to defend a law. In the present case, several justices questioned whether the Bipartisan Legal Advisory Group, the majority-Republican House committee defending the law, had adequate legal standing to do so.

The Court's decision is a boon to the sacerdotal rights of those who become an ordained minister online to legally officiate loving unions between same-sex couples, since it treats these marriages as equal to those officiated by traditionally ordained clergy. The decision effectively eliminates legal preferences for conservative religious views of marriage, which might violate the Due Process clause of the Fifth Amendment to the United States Constitution in addition to the Equal Protection Clause of the Fourteenth Amendment. By leaving the law's repeal up to federal judges in individual jurisdictions, the Supreme Court would have forced ministers and the couples they marry to navigate a legal patchwork where some jurisdictions have repealed the law and others have not.

While the Universal Life Church Monastery does not take a position on political issues, it does stand up for the rights of its ministers, and this includes the right to perform wedding ceremonies for couples recognized by the church. The recent Supreme Court ruling deserves our praise because it dismantles an entrenched system of discrimination against ministers ordained online and same-sex couples alike. We understand that not all ULC wedding officiants will perform these marriages, and no law or person can force you to do so if you don't want to, but for those that do, now is the time for you to celebrate this victory.