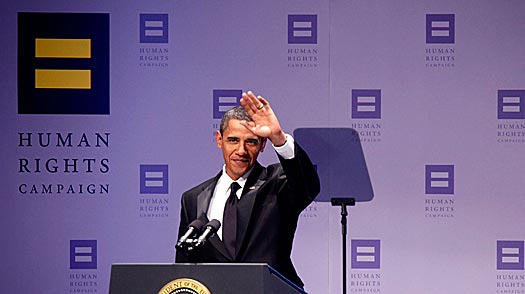 October 12, 2009 - This past Saturday, President Barack Obama addressed the largest LGBT rights organization in the country, the HRC. His speech preceding Sunday's National Equality March on Washington DC, which brought out activists from all across the nation into the streets of our nation's capitol to demand equal rights and protection under the law as provided under the US Constitution. Obama stated during his HRC address,

"For nearly 30 years, you've advocated on behalf of those without a voice. That's not easy. For despite the real gains that we've made, there's still laws to change and there's still hearts to open. There are still fellow citizens, perhaps neighbors, even loved ones -- good and decent people -- who hold fast to outworn arguments and old attitudes; who fail to see your families like their families; who would deny you the rights most Americans take for granted. And that's painful and it's heartbreaking."

The president addressed such problems as the HIV/AIDS epidemic, gay-youth suicides, hate crimes and the controversial 'Don't Ask, Don't Tell' policy signed into law during the Clinton Administration, which prohibits gays from openly serving in the military. His speech ended with his final promise,

"I've called on Congress to repeal the so-called Defense of Marriage Act and to pass the Domestic Partners Benefits and Obligations Act. And we must all stand together against divisive and deceptive efforts to feed people's lingering fears for political and ideological gain."