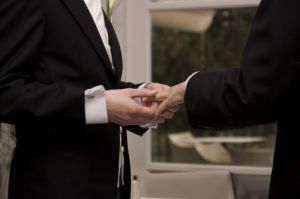 In a decision that passed 33-29, New York State has legalized same-sex marriage. New York is now the sixth state to allow gay marriage and is, and with a population of nearly 19 million, the largest of its kind.

The New York Democratic assembly is expected to pass a newer version of the bill, with more religious exemptions, next week.

In light of President Obama's recent admonishment of DOMA, his announcements regarding his support of gay rights, and his encouragement toward lawmakers in their effort to legalize same-sex marriage, gay rights activists are hoping that the United States will experience a sea-change in favor of marriage equality.

We at the Universal Life Church Monastery congratulate the people of the New York, and see in this monumental decision a beacon of hope for freedom in the United States.