It did not take long for the Church of Latter-day Saints to respond when an international human rights lawyer challenged the church's prohibition against ordaining women priests. Kate Kelly was finally excommunicated from the church she grew up in when her efforts to garner support for women's ordination rights grew too much for church leaders to tolerate. The incident illustrates just how much resistance remains to the full sacerdotal equality of women and men.

The Punishment for Challenging Church Doctrine 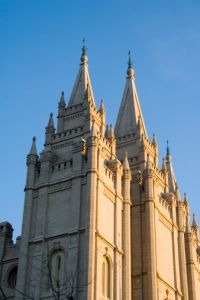 Kelly's case is one of the most high-profile examples of excommunication since 1993, when the church punished six Mormon writers for questioning church teaching. In that case, the church kicked out five permanently and one temporarily. The church arrived at its decision regarding Kelly after her advocacy organization, Ordain Women, drew unprecedented media attention to the church's ban on the ordination of women. While women can hold leadership positions within the church, they aren't allowed to become ordained bishops, presidents of stakes (a group of a dozen congregations known as wards), or lay clergy. Women are also banned from joining the church's highest-ranking leaders, the Quorum of the Twelve Apostles.

The Church has remained mum on the details of Kelly's case, but it has cited church policy to explain its decision. That policy states that only men are allowed to become lay clergy in accordance with "the pattern set by the Savior when it comes to priesthood ordination". While church members are allowed to express disagreement over church doctrine, full-fledged, organized resistance to it receives swift reprisal from church leaders. "We should not try to dictate to God what is right for his Church", said spokeswoman Ally Isom, implying that church leaders know God's thoughts better than Kelly.

The Long Struggle to Become Ordained

Kelly and the other members of Ordain Women have hardly been shy or ladylike in their call for change within the Mormon hierarchy. They had already drawn criticism in April when they marched on Temple Square in Salt Lake City, hitting the church at its beating heart. In a barefaced demonstration of disobedience, the women asked to be invited in to a meeting reserved for members of the priesthood, which includes boys as young as twelve but not a single woman. "We are all of us people who see things that we would love to improve about the church that we love deeply and dearly", said Melissa Mayhew, who drove 40 miles to attend a recent vigil in support of Kelly and Ordain Women.

Most of our ministers already know the Universal Life Church Monastery supports the full and complete ordination rights of women equal to those of men. But so many religious organizations still struggle with the fact that women and men are equally capable as priests, citing tradition and pseudo-scientific notions of sex difference as an excuse for discrimination. Hopefully we as ULC ministers can lead by example to change hearts and minds.