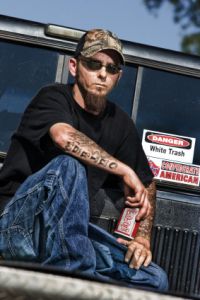 You may think it odd that a person should describe his or her religion as Jedi, but a man who was arrested in the U.S. state of Florida listed his religion as "redneck". The incident makes one wonder: exactly how far can the limits on the definition of religion be stretched?

The man in question, Joshua Lee Joehlin, was arrested in the town of Bradenton for "lewd and lascivious" conduct (he is accused of having sex with a minor), and when Bradenton police asked him his religion for the purpose of filling out a police report, he described himself as "redneck". Perhaps more surprising than this is the fact that the police took Joehlin seriously, filling out "redneck" in the box under religion. According to Jeff Butera of ABC Action News, deputy chief J.J. Lewis said that officers writing up police reports put whatever religious denomination, faith group, or spiritual philosophy is given by the person being arrested, and it does not matter whether it is considered real.

This might be seen as an extreme case of religious open-mindedness. Surely, one might argue, there must be some parameters for defining religion. Hypothetically, a white supremacist might give "racist" as their religion in a police report. It may sound absurd, but if police have no authority to deem whether the religion given is just a tongue-in-cheek joke-religion, anything goes. If nothing else, it forces one to consider what parameters, if any, should exist for defining the religions and faith traditions of the world.

One almost cannot resist asking precisely how a redneck would practice his or her religion. What sort of doctrines or tenets would a redneck adhere to? What sort of deity would they believe in? What kind of sacred text or holy book would make up his or her religious literary canon? Perhaps theirs is an "oral" tradition. Perhaps they believe that it is good and moral to have sexual relations with minors. Perhaps dignity and self-respect, as well as respect for vulnerable young women, are not paramount virtues to uphold in the redneck religion. One wonders.

One explanation for such peculiar behavior on the part of both the person being arrested and the police filing the report is that religion is seen as hallowed ground in the United States. Unlike in France and other western European nations, where secularism is encouraged in the public realm, religion (like guns) is viewed as sacrosanct in the United States especially in the south. Americans routinely cite free speech and free exercise of religion to protect religion from government restriction, so it seems reasonable to suggest that the police are wary of telling people what religion they can and cannot follow, even for something as mundane as a police report.

Give us your thoughts. Should people who are arrested be allowed to give "redneck" despite the odious and laughable connotations of the term for the purpose of filling out police reports, or should they be allowed to put their foot down at their own discretion when the religion given defies common sense?