Give Back the Rainbow!

Disclaimer: The following article is a satire_. Satire is the use of_ irony and sarcasm to criticize an argument or expose its faults and absurdities by pretending to defend it. It explicitly states the opposite of what it means. 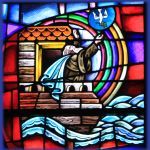 Pastor Ken Hutcherson of Antioch Bible Church in Kirkland, Washington, thinks Christians have a special calling: to take back the rainbow from the LGBT community. Hutcherson made the proclamation in a recent article on the conservative Web site WorldNetDaily, arguing that gays and lesbians have co-opted the rainbow from Christians. We think this is a fantastic idea! Below are a few reasons why homosexuals should give the rainbow back to its real caretakers.

Besides, it isn't really stealing when Christians take it, because Christians have a copyright on rainbows. Rainbows aren't simply natural phenomena that occur where light and water vapor interact--they are a magical message created by God to remind Christians that he won't drown them ever again. Of course, since rainbows were created specifically for this purpose, they couldn't have existed before the Flood, but that's all right. The water vapor canopy theory helps us escape that predicament. It tells us there was no rainfall on Earth until a vast water vapor canopy enveloping the planet collapsed in the Flood, just a few thousand years ago! So, you see, God did make rainbows for Christians, not for the Hebrews, homosexuals, or anybody else. 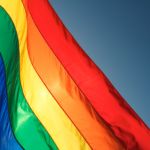 We must also remember that Christianity and homosexuality are mutually exclusive, so when homosexuals use the flag, it must be for their own selfish, ungodly reasons. Homosexuals can't be Christian, because Christians follow the teachings of Christ, which include things like treating others how you want to be treated, giving to the poor and needy, showing forbearance and magnanimity, and practicing peace and nonviolence, and it's common knowledge that homosexuals are incapable of these things. However, people like Hutcherson are acting in perfect Christ-like fashion when they proclaim that "God hates effeminate men" (men like Jesus--who is, er, God) and that "If I was in a drugstore and some guy opened the door for me, I'd rip his arm off and beat him with the wet end". So, all those inner-city churches donning the rainbow flag are co-opting it from real Christian churches, the true stewards of the rainbow.

Christians--that is, real Christians like Hutcherson--should take back the rainbow from homosexuals before they tarnish it beyond recognition with their calls for equality, tolerance, and respect for the private lives of mutually consenting adults. The rainbow isn't merely a natural phenomenon--it is a symbol made by God for Christians to take from whomever they want to use however they want, no matter how irrational or unjustified their claim. Hutcherson should fight for his rainbow at any cost--no matter how un-Christian it makes him.