Does Belief in God Give Life Greater Purpose? 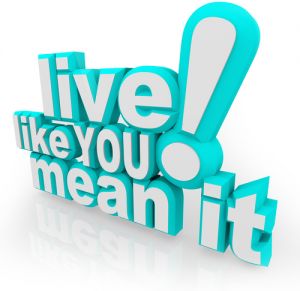 A new study from the University of Pennsylvania suggests that people who strongly believe in God are more likely to reject the notion that life has no purpose than people who believe less strongly in God. Even so, most people who believe less strongly in God still rejected the notion, challenging the assumption that God is necessary to give life purpose. As Universal Life Church ministers we must ask ourselves: if God does not necessarily give life purpose, what does?

Respondents were asked whether they believed in God without a doubt, or whether they did not believe or were unsure. They were then asked whether they agreed or disagreed with the statement, "In my opinion, life does not serve any purpose". Of those who believed in God without a doubt, 33% mildly disagreed with the statement, and 61% of them strongly disagreed with it (for a total of 94%). Of those who did not believe or were unsure, 42% mildly disagreed, and only 49% strongly disagreed (for a total of 91%).
What the figures show is that most people in general reject the notion that life has no purpose, but strong believers slightly outnumber non-believers and weak believers in their rejection of it. Most importantly, although the level of general disagreement was similar between the two groups, a significantly greater number of people who believed in God with certainty disagreed strongly with the notion. That is, strong disagreement with the statement correlated with strong belief in God.

The fact that most atheists and agnostics still have a sense of purpose in life without a rock-solid belief in God means they have to derive their sense of purpose elsewhere. Perhaps the purpose of life is to practice compassion, and this life purpose is determined by ethical reasoning, not the existence of God. In other words, helping the sick and needy is meaningful in and of itself because it alleviates suffering, not because a divine creator said so. In fact, blindly following the will of a creator might even be deemed immoral.
Most people seem to believe life has a sense of purpose, but not everyone agrees that this purpose is rooted in the existence of God. Whatever our belief as ministers ordained online, hopefully we can all agree that doing good is its own reward.