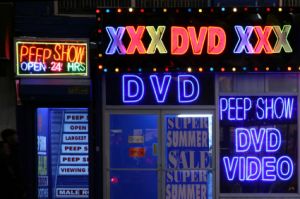 Fundamentalist Christians often encounter resistance in striving to communicate the message of the gospel to purported sinners and non-believers, and the recent strip-club controversy in rural Ohio is no exception. Resentment and indignation have been mounting among a group of exotic dancers who have been protesting outside the gray clapboard façade of New Beginnings Ministries, a conservative evangelical Christian church in a rural part of the U.S. state of Ohio. For the dancers, the efforts of congregation members have had anything but a morally improving effect on their lives.

The conflict began about four years ago when congregants began photographing the license plates of patrons of The Fox Hole, the strip-club where the dancers work, and asking them whether their wives and mothers knew their whereabouts. In addition to accosting Fox Hole patrons, church members have picketed the club. New Beginnings pastor Bill Dunfree claims that the god of the Christian Bible is telling him to shut down the club because of its sinful and licentious nature. It was in response to this unprovoked demonstration on the part of parishioners that the dancers and their supporters proceeded with a counter-demonstration, usually dressed in bikinis, and often on Sunday mornings as men in suits and women in old-fashioned, full-length dresses poured in through the church doors, expressing a mixture of scorn and sympathy for the women whom they sought to "save".

Both strippers and church-goers have debated the theological underpinnings of the church's objections. Not surprisingly, the resounding opinion among fundamentalist Christians is that the values of the fundamentalist Christian community should serve as the common denominator, and the literal law of the land. "As a Christian community, we cannot share territory with the devil," said Dunfree, according to Jeannie Nuss of the Associated Press. "Light and darkness cannot exist together, so The Fox Hole has got to go." Never mind the fact that some people in the community are not Christian, or that the United States was founded on the official separation of church and state. For people like Dunfree, such "dens of depravity" are simply intolerable and should be banned through a thoroughly Christian legal process rather like sharia law in some Middle-Eastern theocracies. Church member Debi Durr defended the church's stance: ""You don't stand up there for four years for hate. That's not hate. That's love." She left dancer and protester Laura Meske with a copy of Jeremiah 3:13, from the Old Testament of the Holy Bible, which admonishes sinners to repent. Meske, a mother of four, feels differently about the church's motivations: "Everybody has sinned, and that doesn't mean I'm not gonna get into heaven," she said, adding, "I believe in Jesus. I don't believe what they preach. They preach hate."

Perhaps the most important question is whether the church has been helping or harming the women. To the church's credit, Dunfee has offered to help support the women with rent, food, and bills if they give up pole-dancing, but it turns out the church has also obstructed the income flow of the women, many of whom use dancing as a stepping-stone to careers in medicine and other professional fields. One recent Friday evening, Meske made only $30 instead of her usual two hundred, largely because the church demonstrators at the club were deterring potential clients. It is almost as if the church is imposing an ultimatum on the women: "Either earn your money the way we want, or we'll make sure you never earn a dime." It does not sound like a very transparent or diplomatic tactic to employ in fact, it strikes one as downright manipulative and conniving. Making ends meet then becomes conditional one does not deserve to survive if one dances nude for men but this does not sound like a very viable church outreach program for struggling single mothers.

Even some moderate Christians in the community have shown disapproval of the way the New Beginnings congregation has treated Fox Hole staff. Anny Donewald, a former stripper who now counsels dancers on their options, has criticized the approach adopted by Dunfree as divisive, stating that she has never witnessed Jesus Christ of Nazareth picketing. Meanwhile, Rae Anderson of New Castle ministries believes Dunfree may have a calling, but that he is being coercive in trying to change the strippers' minds. Anderson argues, "You can share the truth, but you can't make anyone believe what you believe". And Phil Burress, president of the Cincinatti-based Citizens for Community Values, supports the church's protests but also argues the Fox Hole has a right to be there in a civil sense: "It's a legal business whether he likes it or not". While these Christians fall short of taking a truly heartfelt libertarian, laissez-faire stance on the adult entertainment industry, at least they are able to highlight the unscrupulousness of church members who stir up resentment among adult entertainment workers and manipulate their income source.

It remains to be seen whether Dunfree and his congregation, or The Fox Hole staff, will succeed in their designs, but the very fact that the conflict is taking place only illustrates the persistent fears many conservative Christians in the rural United States have about sexual "deviancy". Universal Life Church Monastery's sole doctrine has always been to do that which is right according to one's conscience so long as it does not impinge on the rights of others and is within the law. However, we would like our ministers to join in the discussion and share their thoughts. Should church-goers be poking their noses into the adult entertainment industry and interfering with the way dancers make a living?