How to Perform a Wedding in American Samoa

Congratulations! If you've found yourself at this page it is likely that you are either planning to be married or have been asked to perform a wedding ceremony in American Samoa. Unfortunately, a ULC ordination is currently not recognized in this U.S. territory. The information provided below will inform you about the current marriage laws in the U.S. territory of American Samoa. 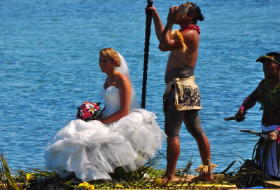 Marriage in American Samoa is governed by Chapter 1 of Title 42 of the Code of American Samoa. Below, you will find that we have reproduced a relevant excerpt of this code.

(a) No minister of any Christian religion has authority to solemnize or perform any marriage ceremony without first having registered with the Registrar of Vital Statistics a letter of identity and confirmation of his authority as a minister in the particular church to which he belongs. Any minister performing marriage in violation of this section shall be deemed guilty of an offense against this title.

(b) No marriage shall be invalid for a failure by the minister to register such letter of identity and confirmation of authority; if the minister is, in fact, a duly ordained and confirmed member of the clergy of any Christian religion. (c) The following are valid and binding marriages:

(1) a marriage performed by a minister of any Christian religion authorized to perform marriages;

(2) a marriage performed by an associate judge, or the Associate Justice or the Chief Justice of American Samoa;