Kicking ‘Em While They’re Down: Criminalizing the Homeless 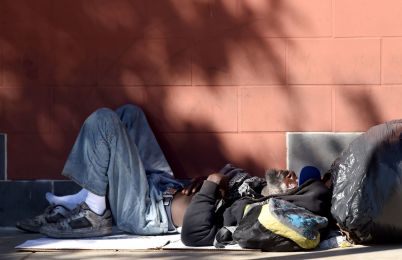 The Patapsco-Lodge Forest Cooperative Parish is no stranger to homeless outreach. However, they never imagined being punished for it. The Maryland congregation has been serving hot meals to the homeless every Friday night for over 20 years, and church officials allow the local homeless population to camp on church grounds. On any given night, around 20 people can be found sleeping in tents or under tarps outside the building. Evidently, county officials took issue with this arrangement in early December they dropped a shocking $12,000 fine on the church for "illegal use of the property as housing units."

While some community members support the church's commitment to Christian good will, others have become increasingly dismayed by its side effects. In fact, a nearby business owner got so fed up that he reported the church for "harboring vagrants". The man explained that he frequently sees homeless people urinating and defecating on church property, within eyesight of his business. His complaint, along with a number of others, led county officials to issue the large fine.

According to church leaders, $12,000 constitutes roughly 10 percent of the church's entire annual income. County officials argued the fine was reasonable because the church encampment was an unnecessary safety hazard. Because local shelters always have extra space, the church was not so much filling a need as diverting the homeless away better-developed assistance programs.

However, after several news outlets picked up the story, the community quickly sided with the church. Under considerable public pressure, county officials were forced to reconsider their decision. The week before Christmas, church leaders were pleased to hear that the fine had been formally rescinded.

Is There a Bigger Problem?

Interestingly, this story reinforces a report from the National Law Center showing that anti-homeless laws are on the rise. Over the last 10 years, local governments all over the country have begun penalizing homelessness with increasing severity. In certain urban areas, such as Seattle and San Francisco, homeless policy has become a hot-button political issue. One side stresses the importance of compassion when dealing with individuals who are down on their luck and just trying to get by, while the other side thinks the government should crack down by more strictly enforcing the law.

In certain places, an even more extreme approach has been taken. It may surprise you to learn that the Hawaiian city of Honolulu currently has some of the toughest homeless policies in the entire country. Just a few years ago, Honolulu was dealing with a full-on homeless crisis. Thousands of people could be found sleeping on benches and in public parks near the famous Waikiki beach. Fearing that the city's lucrative tourism industry would begin to suffer, Mayor Kirk Caldwell instituted a set of strict measures; the city banned all camping in public areas and in vehicles, and completely outlawed panhandling. The mayor explained his thinking:

The results? Cosmetically, the policies have been a success. Public areas are no longer swarming with homeless people, and the city's large encampments have been disbanded. However, critics point out that the underlying problem hasn't been solved. While Honolulu's homeless population no longer frequents the main stretches and tourist areas, it's not like they've gone away most have just moved to the outskirts of town or into the hills above the city. Critics say that this policy of "criminalizing" homelessness only further isolates them and makes the already-difficult task of getting reintegrated into society nearly impossible.

The Role of the Church

While most churches don't have encampments, many operate other volunteer programs, such as serving food to the homeless. However, even this seemingly-harmless act of charity has come under fire. In fact, citing concerns over safety and loitering, over 70 cities throughout the U.S. have officially made it illegal to feed the homeless within city limits. This has left some churches in a tough spot they want to feed the hungry, but doing so is now forbidden by the local government.

The search continues for a viable solution to the homelessness issue. It seems that many places have run out of patience, and have begun resorting to tougher tactics. What do you think about this so-called "criminalization" of homelessness? Should churches be allowed to provide services like meals and shelter to the homeless, or is the government right to step in and intervene?